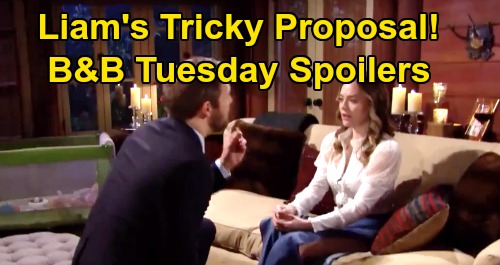 Of course, this news came as a horrible shock to Steffy. As B&B viewers know, Steffy was really under the belief that Thomas was in the process of reforming, and that he was no longer obsessed with Hope and on a tirade against Liam.

Steffy was stunned to hear Liam outline all of the horrible things that Thomas said to him, and on Tuesday’s B&B episode, Steffy will head straight to Thomas and confront him about his threat.

Steffy probably won’t want to believe that her brother said all of the awful things that Liam reported, so she’ll want to get Thomas’ side of the story. Of course, he’ll probably respond just like he responded when Hope quizzed him about his argument with Liam, admitting to saying things in the heat of the moment but insisting that Liam had blown everything out of proportion.

But will Steffy buy Thomas’ explanation, or will she think that Liam’s right and Thomas hasn’t reformed at all? Well, chances are, Steffy will be somewhere in the middle – still skeptical of Thomas and his motives but hopeful that he’s really over Hope and is truly moving forward with Zoe Buckingham (Kiara Barnes).

Meanwhile, on the new episode of B&B on Tuesday, January 7, Liam will make a bold move in his relationship with Hope. Now that he’s seen Thomas’ true colors, he’s seriously worried about Hope’s safety.

Liam now knows that Thomas wants to be with Hope in the long term, and that his relationship with Zoe is just a ruse. And he’s afraid of what Thomas could do with unfettered access to Hope.

So Liam will decide that the time is right to propose to Hope. Of course, Liam loves Hope and certainly wants to marry her, but there will be more to his proposal than just a proposal of marriage.

Liam will want to build a life with Hope in a Thomas-free environment, so he’ll have a giant stipulation attached to his proposal – it looks like he’ll insist that Hope cut all ties to Thomas so that she no longer has to interact with him.

Ostensibly, that will mean that Hope won’t be able to have Thomas as her designer for Hope For The Future…and it also looks like Liam will want Hope to halt the adoption process and no longer be legal guardian to Douglas Forrester (Henry Joseph Samiri).

So it appears that Liam’s proposal will be something like “I’ll marry you but only if Thomas has absolutely no part in our lives.”

Well, according to B&B spoilers, that’s not going to fly with Hope, who will balk at the idea of giving up legal guardianship of Douglas. Hope will be incredulous that Liam could even suggest that she cut ties with Douglas, but it looks like Liam just won’t see any other way.

Liam might even point out that he never really wanted to bring Douglas into their family in the first place, which will probably anger Hope even more.

The Bold and the Beautiful spoilers say that Liam won’t have a good reaction to Hope’s unwillingness to cut Thomas out of her life, and that he’ll say he can’t do this anymore and walk out on her.

It doesn’t look like a good situation for Lope, as Liam just won’t seem willing to have Thomas be a part of his life going forward. And that’s going to place Hope smack dab in the middle of a huge dilemma.