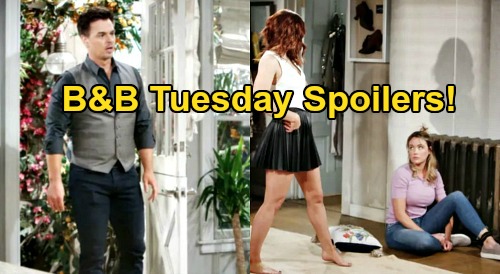 The Bold and the Beautiful spoilers for Tuesday, July 21, tease that the action will pick up as Wyatt Spencer (Darin Brooks) walks into the beach house and is completely dismayed by what he sees.

As B&B viewers will remember, Wyatt has returned home just moments after Penny Escobar (Monica Ruiz) knocked Flo Fulton (Katrina Bowden) unconscious in the living room. Now Sally Spectra (Courtney Hope) and Penny are dragging Flo out of the room, and it’s been up in the air as to exactly what Wyatt has just seen there.

Wyatt had exclaimed a big, “What the hell?!” But Wyatt won’t be seeing Penny and Sally in the act of trying to remove Flo’s unconscious body out of the room.

Rather, B&B spoilers say that Sally and Penny will manage to haul Flo’s body over to Sally’s apartment, where they’ll tie her to a radiator and hold her captive. It looks like Flo will quickly come to, and she’ll talk with Sally, who will share her plans for going forward.

According to B&B spoilers, Flo will be appalled by what Sally has done, and she’ll be even more appalled when she learns about Sally’s ongoing plan. It seems that Sally will plan to keep Flo kidnapped indefinitely…or at least until Sally can go seduce Wyatt and do everything in her power to get pregnant by him.

Flo is going to be horrified by this plan, as is Penny, who will probably just want Sally to cut her losses and end this whole plan asap.

Well, ongoing The Bold and the Beautiful spoilers indicate that Sally’s plan is going to fall flat on its face…as is Sally. Flo may be tied to a radiator, but she’ll do her best to fight back against Sally, and in the days to come, Flo will manage to grab hold of Sally’s ankle and trip her.

It’s all going to lead up to some major excitement and probably the end of Sally’s ruse. It looks like Sally will be facing the music in upcoming days.

But back to the Tuesday’s B&B episode, it seems that Katie Logan (Heather Tom) will get another visit from Bill Spencer (Don Diamont). Bill will likely go to see Katie at Forrester Creations, since the two aren’t currently living in the same house.

B&B viewers will remember that Bill temporarily moved out of the mansion where he lives with Katie and Will Spencer (Finnegan George) because of his kiss with Brooke Forrester (Katherine Kelly Lang) that was projected for all to see on the digital picture frame.

Well, Bill is determined not to give up on Katie, even though Katie is thoroughly disgusted with Bill for his dalliance with Brooke. On Tuesday’s B&B episode, Bill will tell Katie that he’ll accept any consequences from his actions, except for one – he’ll refuse to lose Katie and his family with her and Will.

We’ll see how Katie reacts to this – previously, Katie just didn’t know what she was going to do about the situation, as she was still in shock over witnessing the kiss as she did.

But Katie will have Will to think about, so perhaps she’ll give Bill a break, or at least some indication of what she’s thinking about their future together. It seems that Katie may want some big assurances that Bill is going to stay away from Brooke going forward.

Maybe Katie should insist that Bill and Brooke are never alone together going forward!

It sounds like a lot of B&B drama is heating up for Tuesday’s episode, so stay tuned! We’ll be sure to give you updates as more B&B news and spoilers comes in. Stick with the CBS soap and don’t forget to keep CDL bookmarked for the latest Bold and the Beautiful daily recaps, news, and spoilers.

🚨SNEAK PEEK ALERT🚨 Here’s what you can expect to see on all-new episodes of #BoldandBeautiful. pic.twitter.com/HLWr9vUk6v