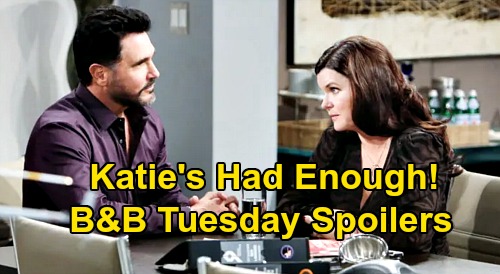 The Bold and the Beautiful spoilers for Tuesday, March 31, tease that Quinn Forrester (Rena Sofer) will do her best to get Ridge Forrester (Thorsten Kaye) to go after Shauna Fulton (Denise Richards). As B&B viewers know, Ridge is heartbroken about Brooke Forrester’s (Katherine Kelly Lang) kiss with Bill Spencer (Don Diamont), and he’s currently nursing his wounds over a drink at the Forrester mansion.

Of course, Quinn is there, too, and she’s just told Ridge that Shauna is packing her bags as they speak. Ridge is peeved with Quinn for uploading the video of Bill and Brooke to the digital picture frame, but there’s probably a part of him that feels like Quinn did him a favor – after all, he probably thinks that it was only a matter of time before Brooke ended up sleeping with Bill.

According to B&B spoilers, Quinn will continue to work on Ridge, pushing him to divorce Brooke and go find Shauna. Of course, it might take Ridge a little time to get over the fact that Shauna recorded the video of Bill and Brooke’s kiss. But as Ridge hears more details about how Quinn actually stole the video from an unknowing Shauna, he’ll realize that Shauna intended to do (and did) the honorable thing.

And by comparison, Brooke will probably look even worse in Ridge’s eyes. Ongoing B&B spoilers indicate that Ridge will eventually end up at Flo Fulton’s (Katrina Bowden) apartment to see Shauna, and that he’ll eventually leave for Las Vegas with her. So, it looks like Ridge will find some solace with Shauna – the one person who treated his feelings with respect.

Meanwhile, on the new episode of B&B on Tuesday, March 31, Bill will have an uphill battle in front of him. As B&B viewers know, he’s in the doghouse with Katie Logan (Heather Tom) right now, since Katie had a front-row seat to seeing the video of him kiss Brooke. Katie is totally torn apart right now. She feels that Bill’s incapable of being faithful to her, and she’s just been completely humiliated in front of her family and closest friends.

Well, it looks like Bill will start working on Katie to get him to forgive her. He’ll probably say that what happened between him and Brooke was just a moment that got out of hand that he regrets, but B&B viewers know that’s not exactly true. Bill daydreamed about that kiss repeatedly, and it really looked like he was starting to obsess over Brooke again.

Katie will probably have a lot of questions for Bill about how he felt about the kiss, how it happened, and why he was even at the cabin in the first place tracking down Brooke. She may question why Bill felt the need to defend Brooke against Thomas Forrester (Matthew Atkinson) in the first place, and why he thought he needed to be the person to offer Brooke comfort.

It’s going to be a mess, and the Bold and the Beautiful spoilers say that Katie’s anger isn’t going to just die down anytime soon. Katie’s going to be furious with Bill, and she’ll likely be wondering about how she’s going to handle this situation, considering that their son Will Spencer (Finnegan George) is in the picture. At any rate, we’ll likely see Bill groveling and doing his best to downplay what happened.

It sounds like a lot of B&B drama is heating up for Tuesday’s episode! Stay tuned to the CBS soap, and we’ll give you updates as more B&B news comes in. And remember to check CDL often for the latest Bold and the Beautiful spoilers, recaps, and updates.