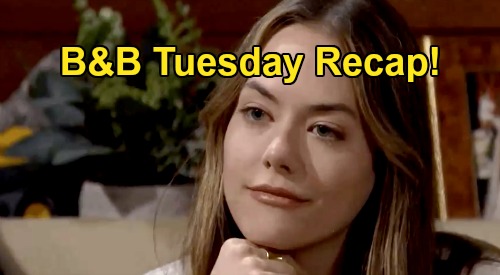 The Bold and the Beautiful spoilers recap for Tuesday, October 20, reveal that Steffy Forrester (Jacqueline MacInnes Wood) and John “Finn” Finnegan (Tanner Novlan) enjoyed some alone time together at the cliff house.

Talk turned to Liam Spencer (Scott Clifton), and Steffy said that Liam’s tendency to worry doesn’t compete with her own level of stubbornness. “I wish he could accept it, having you in my life,” Steffy said.

Steffy then said that it scared her to think of how easily she could have lost everything, including Kelly Spencer (Colette and Avalon Gray).

Finn tried to take some responsibility for Steffy’s downward spiral, but Steffy stopped him, saying that she’s the one who had the responsibility…to her daughter. Finn praised Steffy for fighting her way back to Kelly and to their future.

“You can count on me, I will make sure that you and Kelly are safe and happy,” Finn said, as Steffy smiled.

Steffy then opened up about how she, Hope Spencer (Annika Noelle), and Liam had been mixed up together for so long, like a new enlightened family.

Steffy admitted to feeling like her mom, who lost Ridge Forrester (Thorsten Kaye) to Brooke Forrester (Katherine Kelly Lang), and Steffy said that that she didn’t want Kelly growing up in a broken home.

“I think that’s another reason I was taking those pills,” Steffy said. “But after getting help I don’t feel that way anymore. I’m stronger now, and that’s because of you, Finn,” Steffy said with a smile.

Steffy credited Finn for pointing her in the right direction – toward something that she hasn’t felt in a very long time…peace. “I’m ready to move forward, and I have a whole new perspective on my life and my future. I want you in it,” Steffy said.

Steffy continued, saying that she felt grateful for Finn, but that it was more than that. “Finn, I love you,” Steffy said. Finn immediately told Steffy that he loved her, too, and he and Steffy kissed. Suddenly, Kelly called for her mom over the baby monitor, and Steffy and Finn smiled and laughed together.

Meanwhile, at the cabin, Liam told Hope that he never wanted her to feel disrespected. Hope urged Liam to let Steffy live her life. Hope wondered if Liam preferred for Steffy to be lonely and pining after him, and she urged Liam to take a step back and take a hard look at himself.

“You look like you’re jealous and unable to accept Steffy moving on with another man,” Hope said matter-of-factly.

Liam tried to protest, saying that his issue was with Finn and not Steffy, and he looked really conflicted as Hope told him not to challenge Steffy’s relationship with Finn. Hope went on, saying that Liam had his own life to life – their life together with their family.

“There was always going to be another man in Steffy’s life someday, Kelly’s too,” Hope said. “You have to accept that.”

Eventually, Liam said that Hope was right, and that Steffy was going to do what she wanted to do, and that it was beyond his control.

Stunned with the words that were coming out of his mouth, Liam said, “I can’t stop Steffy from dating Finn, can I? And I can’t choose who she does and doesn’t bring into my daughter’s life, and that scares me.”

Liam again stated that it was the way in which Finn came into Steffy’s life that bothered him, and it was how Finn crossed a line. But Hope gently told Liam that she thought that HE had crossed a line by telling Steffy who she could and couldn’t date. “It makes me a little worried about OUR family,” Hope said.

Liam said that he didn’t want to jeopardize what they had, and that Hope was his bedrock and that their family was going to be fine…and that he would let go to focus on his life with Hope. Hope smiled.

In the Forrester design office, Zende Forrester Dominguez (Delon de Metz) and Zoe Buckingham (Kiara Barnes) talked about Carter Walton’s (Lawrence Saint-Victor) invitation for her to move into his loft. Zoe told Zende that it felt like things were moving a bit quickly between herself and Carter, and she asked Zende what he thought. Zende wasn’t sure that he was the guy Zoe should ask about this.

As Zoe went to get changed, she picked up her guitar in its case, and Zende asked if Zoe played. Zoe said that she had been working on a song lately.

Zende asked to hear the song, and so Zoe sang it while Zende recorded her on his phone. Zoe finished and said that she hadn’t sung for anyone in a long time. Zende was blown away and said that it was beautiful.

Finally, across the hall in the Forrester CEO office, Carter was working when Charlie Webber (Dick Christie) came in to congratulate the new COO on his appointment.

Charlie mentioned that he noticed a little steaminess where Carter and Zoe were concerned, and that if Carter needed love advice, then he was available. Carter thanked Charlie but said that things were going great between him and Zoe.

That was a terrific episode of B&B, and there’s plenty more coming tomorrow, so stay tuned! We’ll give you updates as B&B news comes in. Stick with the CBS soap and don’t forget to check CDL often for the latest Bold and the Beautiful spoilers, news, and daily episode recaps.