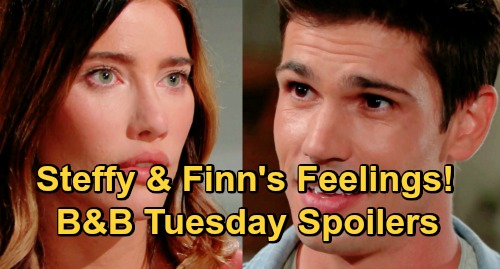 The Bold and the Beautiful spoilers for Tuesday, October 20, tease that Steffy Forrester (Jacqueline MacInnes Wood) will continue to spend time with John “Finn” Finnegan (Tanner Novlan) at the cliff house.

As B&B viewers know, Finn has just received a glowing endorsement from Thomas Forrester (Matthew Atkinson), and on Tuesday’s episode it appears that Thomas will skedaddle from the cliff house, leaving Finn and Steffy to talk and enjoy spending time together.

As you might know if you saw the B&B promo for this week, Steffy will soon tell Finn that she loves him, and other B&B spoilers indicate that Finn will happily return the sentiment.

The Bold and the Beautiful spoilers tell us that Finn and Steffy will be inching toward this big revelation on Tuesday’s episode, October 20, so we should see some good Steffy-Finn interactions as the episode unfolds.

Finn may reveal that it was love at first sight when he saw Steffy in the hospital, and Steffy will probably verbalize when she knew that Finn was “the one.”

Meanwhile, on the new episode of B&B on Tuesday, October 20, Hope Spencer (Annika Noelle) will want to hear something from Liam Spencer (Scott Clifton) indicating that he’s heard her, and that he’ll back off his overprotectiveness toward Steffy.

As B&B viewers know, Hope has just told Liam that his behavior toward Steffy is disrespectful toward both her and Steffy, and Liam seemed pretty upset and taken aback by this.

We suspect that Liam will continue trying to make this about Kelly Spencer (Colette and Avalon Gray) and wanting to protect her from someone who might be tempted to cross ethical bounds in the future.

But Hope will probably call that out as nonsense, since there’s simply no evidence that Finn neglected Steffy’s care because he was attracted to her.

Besides, if Liam wanted to keep Kelly away from people who have crossed an ethical boundary, he’d be hard pressed to find anyone in his own family who could be around the little girl!

Finally, on Tuesday’s episode of B&B, Zoe Buckingham (Kiara Barnes) will open up to Zende Forrester Dominguez (Delon de Metz) were Carter Walton (Lawrence Saint-Victor) is concerned. Zoe has just told Zende that she declined Carter’s invitation to move in with him, and on Tuesday, it looks like she’ll tell Zende exactly why.

This should serve to bring Zoe and Zende even closer together, but it will probably produce some uncomfortable moments as well, since Carter and Zende are so close.

It won’t be long before Zoe ends up serenading Zende with an original song, so it looks like Zende will see some more of Zoe’s talents, and he’ll surely be impressed.

Tuesday’s episode is going to be terrific, so keep tuning in to the CBS soap! Remember, CDL is your go-to place for all the latest Bold and the Beautiful spoilers, news, and daily episode recaps.