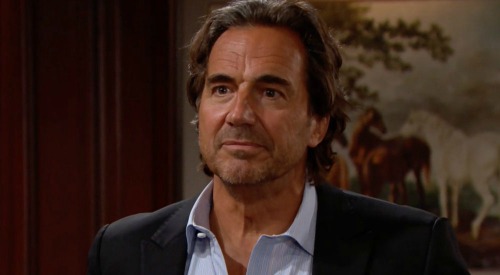 The Bold and the Beautiful (B&B) spoilers update for Wednesday, September 9, teases that Brooke Logan (Katherine Kelly Lang) and Ridge Forrester (Thorsten Kaye) will get some surprising news regarding an ally. There’ll be someone unexpected rooting for “Bridge” – and he or she will have an interesting reason why.

One startling option would be Thomas Forrester (Matthew Atkinson), who’s done some soul-searching and might suggest he’s a firm believer in second chances. Since Thomas was previously so against Brooke being in Ridge’s life, he’d be a shocking ally for sure.

Then again, maybe another unexpected ally will emerge to give Brooke and Ridge support. No matter who steps up to cheer “Bridge” on, Brooke will get a confidence boost. It won’t be long until Brooke makes another desperate plea in hopes of reuniting with Ridge, who’ll at least agree to hear her out.

Of course, that’s not going to work for Quinn Forrester (Rena Sofer), who’s determined to make sure Ridge sticks with Shauna Fulton Forrester (Denise Richards). Quinn wants Ridge to remain married to Shauna and live happily ever after. As far as Quinn’s concerned, Ridge needs to put Brooke in the rearview mirror!

As part of Quinn’s plan to make that happen, she’ll kick her manipulation plot up a notch. Quinn’s been working behind the scenes to botch Brooke’s reunion attempts and push Bill Spencer (Don Diamont) in her direction.

This time Quinn will get someone else in on her manipulation, but this plan will flop within the next B&B episode or two.

Quinn may think she can pull Katie Logan (Heather Tom) into her scheme somehow. Since a visitor’s supposed to barge in on Brooke’s attempt to talk things out with Ridge, Katie might be a good fit.

The Bold and the Beautiful spoilers say Katie will compare notes with Brooke later this week, which will lead to the sisters realizing they’ve been duped.

Perhaps Quinn will do something that sets up that realization through her scheming on Wednesday. Regardless, Quinn’s latest plan will fail – and it could put her previous one in jeopardy, too.

Quinn and Shauna were in on the plot to lock in Ridge’s divorce and manipulate him into another marriage in Vegas. That’s certainly not a secret Shauna and Quinn are eager to see blow up!