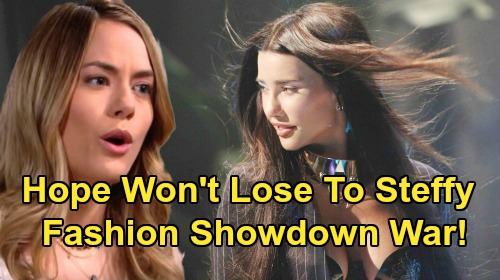 The Bold and the Beautiful (B&B) spoilers tease that Hope Logan (Annika Noelle) will be more motivated than ever to beat Steffy Forrester (Jacqueline MacInnes Wood). B&B fans know there have been some fashion showdown preparations going on at Forrester Creations. Hope has teamed up with Thomas Forrester (Matthew Atkinson), and Sally Spectra (Courtney Hope) has joined forces with Steffy.

Things can get pretty competitive when lines are at stake, especially when you’ve got a history like Steffy and Hope have. However, their rivalry should be magnified by the recent drama outside the cliff house.

Hope saw Liam Spencer (Scott Clifton) kissing Steffy and realized the love between them was still strong. She knows she’ll always have to share Liam if she fights for their future together.

Since Hope is sick of this battle for Liam’s heart, she’ll turn her attention to a different battle: this fashion showdown. Hope’s breakup with Liam will give her more time to devote to the competition – and it’ll give Hope another reason to play to win!

Hope will undoubtedly feel like she lost the war for Liam’s love, but she’ll have no intention of losing the war at work.

Steffy will sense that Hope’s putting in some vengeful hard work. She’s also been impressed with Thomas’ designs and can see that he could be a fashion force to be reckoned with.

As for Sally’s designs, Steffy’s already been a bit picky about those. She has to be if she wants to pull off a victory here. Steffy can’t settle for anything less than amazing if she wants to make sure her line is the winner.

The Bold and the Beautiful spoilers say Steffy may remind Sally of that soon. Sally will present some new designs that leave Steffy fearing defeat. Steffy will grow worried that if Sally can’t come up with something better, they’re going to crash and burn while Hope and Thomas cruise to an easy triumph.

Naturally, that’ll put a ton of pressure on Sally, but she’ll want to rise to the challenge. Will Steffy give Sally that chance or perhaps go in another direction? Could Sally’s role in this showdown be in jeopardy? Time will tell, but Steffy and Hope’s fashion faceoff is sure to get cutthroat in the coming weeks.