The Bold and the Beautiful Spoilers: Vinny Horrified By Thomas’ Plans – Blasts Friend For Using Douglas 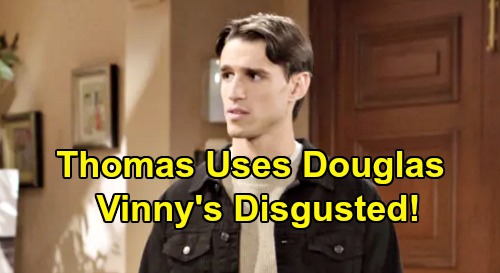 The Bold and the Beautiful (B&B) spoilers tease that Thomas Forrester (Matthew Atkinson) will keep on scheming over the coming days. Really, nothing gets in the way of Thomas’ plans, and as B&B viewers know, he doesn’t hesitate to use other people in his schemes to get what he wants.

He’s currently using Zoe Buckingham (Kiara Barnes) in his grand plan to win over Hope Logan (Annika Noelle). It’s a long game, but Zoe as a “girlfriend” is just what Thomas needs to keep Hope interacting with him on a regular basis.

Well, according to B&B spoilers, Thomas will once again reconnect with his old friend Vinny Walker (Joe LoCicero). It’s been a while since viewers have seen Vinny, as he’s been out of town spending time with his girlfriend. But soon, he’ll be back on the B&B scene, and he’ll get some updates from Thomas about what his next moves will be.

The Bold and the Beautiful spoilers say that Vinny won’t be particularly impressed with what Thomas has in mind now. Thomas might share his ongoing plan to rid the Forrester family of Brooke Forrester (Katherine Kelly Lang), which could go into high gear this week, February 3-7, as Thomas will be approaching Quinn Forrester (Rena Sofer) and asking her to join forces against Brooke. But it looks like it’s another of Thomas’ plans that will really disturb Vinny.

Of course, B&B viewers know that Thomas hasn’t hesitated to use his son Douglas Forrester (Henry Joseph Samiri) in his plot to win Hope over. He’s repeatedly asked Douglas to say and do things around Hope in order to manipulate her, and there was even a point in time when Thomas was angry with Douglas for telling the truth about Beth Spencer (River Davidson and Madeline Valdez). Douglas acted afraid of his father, but the two seem to have gotten beyond that.

But now, Vinny is going to be upset over what Thomas has planned when it comes to Douglas, and Vinny won’t hesitate to call out Thomas for how his plan is putting Douglas in a terrible position.

The Bold and the Beautiful spoilers say this has something to do with the big Forrester dinner that Thomas will plan – a dinner where Douglas will somehow take center stage. It will probably be a move designed to manipulate Hope’s feelings once again.

We’ll see whether Thomas listens to Vinny. Chances are, he won’t, and he’ll probably protest that nothing he’s doing is causing harm to Douglas. But what about Douglas’ confusion over Thomas being with Zoe yet continually talking about how they’re going to be a family with Hope someday?

It’s bound to be confusing for Douglas, and perhaps that’s what Vinny will take objection to. At any rate, it looks like Thomas will have some big plan for Douglas.

Do you think that Thomas will end up confusing Douglas through all of his schemes? Stay tuned to B&B and don’t forget to check CDL often for the latest Bold and the Beautiful spoilers, updates, and news.