BY hellodrdavis on March 31, 2020 | Comments: 2 comments
Related : Soap Opera, Spoiler, Television, The Bold and the Beautiful 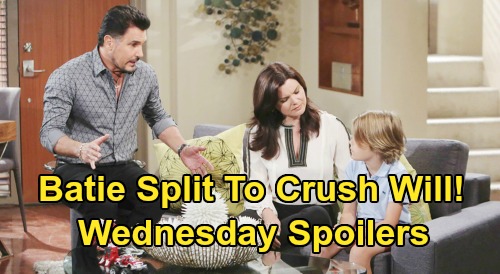 The Bold and the Beautiful spoilers for Wednesday, April 1, tease that Ridge Forrester (Thorsten Kaye) will make a big move. As B&B viewers know, Ridge has just gone to see Shauna Fulton (Denise Richards) after Quinn Forrester (Rena Sofer) urged him to stop her from going back to Las Vegas. Shauna was on her way out of town because she didn’t want to get in the way of Ridge’s happy reunion with Brooke Forrester (Katherine Kelly Lang).

But Ridge’s reunion with Brooke ended up being shockingly short-lived. Now that Ridge has seen the video of Brooke and Bill Spencer (Don Diamont) kissing, he can’t even stand to be in the same room as Brooke. He doesn’t want to talk with Brooke, see Brooke, or even think about Brooke. And leaving town with Shauna sounds pretty good to him right about now.

Well, Shauna was pleasantly surprised when Ridge floated the idea of going to Vegas with her, and on Wednesday’s B&B episode, it looks like he’ll persuade Shauna to let him accompany her there. Of course, Ridge doesn’t seem to want Shauna to move away from Los Angeles permanently, but a get-away from all the Brooke and Bill drama is just what he needs, so it looks like he’ll urge Shauna to take him with her.

At any rate, The Bold and the Beautiful spoilers say that Ridge will make a significant decision regarding Shauna on Wednesday’s episode. Whether that’s his decision to go with Shauna to Vegas or some other decision remains to be seen. Ridge might just decide to give a relationship with Shauna a chance – after all, this is Ridge we’re talking about, and he tends to jump from relationship to relationship pretty readily.

Meanwhile, on the new episode of B&B on Wednesday, April 1, it looks like Bill is going to follow Katie Logan (Heather Tom) home and force a conversation with her. B&B viewers will remember that Katie left Brooke’s mansion alone, saying that she wanted to be by herself and think. Well, as it turns out, it doesn’t appear that Katie will get much time to herself.

The Bold and the Beautiful spoilers say that Bill will track Katie down and do his best to explain what happened between him and Brooke. Of course, Katie has already heard all the pleas and promises before, and she probably won’t be in the mood to hear it all again. B&B spoilers indicate that Katie’s grief and shock will morph into anger as she hears Bill go on about how sorry he is and that he wants nothing more than to continue their life together.

Well, it’s totally understandable why Katie will be so furious. B&B viewers will remember that Katie was very reluctant to get back together with Bill this last time, specifically because she was worried about his wandering eye and his history with cheating with Brooke. At the time, Katie grilled Bill intensely about his feelings for Brooke, and Bill promised up and down that his attraction to Brooke was over.

So when Bill promises Katie that he’ll fight for their family, she’s going to be resistant to his sentiment. Katie will probably say that she’s heard it all before and that she can’t expect anything to magically change. Plus, Katie will be deeply worried about Will Spencer (Finnegan George) and the effect that a breakup could have on him – yet, she’ll probably worry about the message it would send to Will for her to stay with a philandering husband.

At any rate, look for some gripping scenes between Bill and Katie on Wednesday’s episode. It sounds like a lot of B&B drama is heating up, so stay tuned! We’ll give you updates as more B&B news comes in. Stick with CDL for the latest Bold and the Beautiful recaps and spoilers.