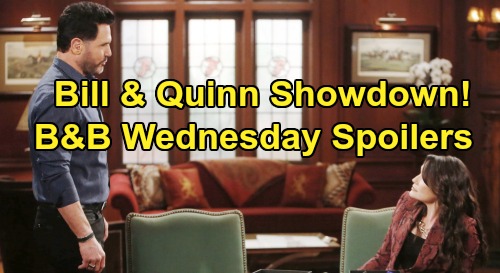 The Bold and the Beautiful spoilers for Wednesday, April 15, tease that Ridge Forrester (Thorsten Kaye) and Shauna Fulton (Denise Richards) will continue their wild evening in Las Vegas. As B&B viewers know, Ridge and Shauna are out partying on the strip, and they appear to be drinking heavily and having a grand old time. Ridge was shown having difficulty standing straight, and he and Shauna were shown kissing against the backdrop of a wedding chapel.

Of course, that begs the question…did Ridge and Shauna have a wedding ceremony at the chapel? B&B viewers will have to wait until Wednesday’s episode to see what actually happened – it will be interesting to see what shape Ridge is in when we see him next, since he was clearly having difficulty holding his liquor!

Exactly how it’s all going to go down remains to be seen, but B&B spoilers are clear that Ridge will wake up in Los Angeles with Brooke the morning after his wild night in Las Vegas with Shauna, and that he’ll have no memory of what happened.

Of course, the big question here is whether Ridge and Shauna got married, and if so, whether it was at all legal. At any rate, it looks like Ridge will have no memory of anything!

Meanwhile, on the new episode of B&B on Wednesday, April 15, it looks like Bill Spencer (Don Diamont) will have a tense interaction with Quinn Forrester (Rena Sofer).

As B&B viewers know, Bill was livid with Quinn for uploading the video of his kiss with Brooke at the reunion party, but thus far he hasn’t really lashed out at Quinn, since he’s been too busy doing damage control with Katie Logan (Heather Tom).

Well, it seems that Bill will decide to pay Quinn a visit to express his displeasure with her for what she did. He’ll probably point out that Quinn didn’t just hurt Brooke, which was her main goal, but that she also deeply hurt Katie, too.

Bill will probably also argue that Quinn might have just broken up Will Spencer’s (Finnegan George) home. It’s going to be an angry exchange, and at the end of it all, Bill will threaten Quinn.

We’ll see what Bill’s threat is about, but he’ll probably let Quinn know in no uncertain terms that she’s to come nowhere near him or Katie ever again. Or he could say that if Quinn does anything else to hurt Katie, then there will be consequences. Something tells us that Quinn will remain defiant and completely unrepentant for her actions.

Finally, the Bold and the Beautiful spoilers say that Sally Spectra (Courtney Hope) will have to work hard to hide her feelings toward Flo Fulton (Katrina Bowden).

It looks like Flo will have convinced Wyatt Spencer (Darin Brooks) to give Sally the bad news that she’s got to move out. As B&B viewers know, Flo urged Wyatt to get Sally set up in a medical facility where she could have the care she needed.

Well, when Wyatt ends up having that talk with Sally, she’s not going to be happy at all. Moving out will of course be totally counterproductive to Sally getting closer to Wyatt, plus from a medical standpoint she’s not going to be able to go into a hospice type setting since her whole terminal illness is a ruse.

Sally’s going to have to think quickly to get out of this. And it seems that Sally’s first instinct will be to get angry with Flo, since she’ll probably realize that Flo was behind Wyatt’s decision to ask her to move out.

That will put Sally in a bind – she’ll feel like lashing out at Flo, but she’ll have to pretend like she’s weak and dying, and that she appreciates and actually likes Flo. B&B viewers should see Sally struggle with her feelings as she tries to figure out what her next move will be.

It sounds like a lot of B&B drama is heating up for Wednesday’s episode, so stay tuned! Stick with the Bold and the Beautiful and remember that CDL is where you should turn for all the latest B&B spoilers, recaps, and news.