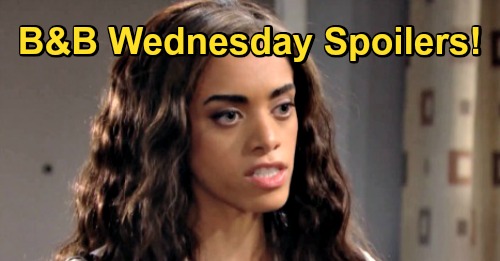 The Bold and the Beautiful spoilers for Wednesday, December 30, tease that Hope Spencer (Annika Noelle) is going to demand some answers. As B&B viewers know, Hope has just walked into the cabin where Steffy Forrester (Jacqueline MacInnes Wood) and Liam Spencer (Scott Clifton) were fiercely arguing about their big secret. Hope heard Steffy intently tell Liam that no matter what, he “couldn’t tell Hope.”

Well, now Hope is insistent that Liam needs to tell her what he and Steffy were just arguing about. There’s definitely going to be a moment here where Liam’s going to want to come clean and confess the details of his affair with Steffy.

But ongoing B&B spoilers indicate that Hope won’t learn the truth about Liam and Steffy’s night together just yet, so either Liam or Steffy is going to come up with some kind of cover story.

We’ll see exactly what Liam and Steffy tell Hope, but something tells us that it could have something to do with Thomas Forrester (Matthew Atkinson). Perhaps Steffy will think quickly on her feet and claim that she was urging Liam not to tell Hope about his real feelings about Thomas living at the mansion.

That would probably make sense to Hope, but we’ll see what Steffy and/or Liam actually come up with.

Meanwhile, on the new episode of B&B on Wednesday, December 30, Zoe Buckingham (Kiara Barnes) and Carter Walton (Lawrence Saint-Victor) will get into it as they discuss the job offer that Paris Buckingham (Diamond White) will be mulling over.

As B&B viewers know, Paris has just been given a lot of food for thought by Ridge Forrester (Thorsten Kaye) about a job with the Forrester Foundation.

But Zoe flipped out on Carter when he happily told her about the strong possibility that Paris would be getting a job at Forrester Creations.

Of course, viewers know that Zoe hasn’t been keen on how Paris has been slowly infiltrating her life, and she’d actually prefer that Paris got a job somewhere outside of Los Angeles. Zoe is feeling smothered by her sister, and she wants to keep her life at Forrester Creations all hers.

Well, look for Carter and Zoe to have a major disagreement about the situation, as Zoe makes it perfectly clear that Carter needs to rescind the Forrester Foundation job offer that has been extended to Paris.

It looks like Carter won’t want to do that, and he and Zoe will clash over their views on the subject. Carter will probably struggle to figure out what’s underlying Zoe’s desire to have her sister go away.

Of course, Zoe won’t be able to really articulate all of her concerns, since part of her desire to send Paris packing is how Paris seems to be moving in on Zende Forrester Dominguez (Delon de Metz) – someone that Zoe also has some latent feelings for.

Zoe’s inability to explain herself is really going to throw Carter for a loop, and B&B spoilers say indicate that the conversation won’t go well from here.

Wednesday’s episode sounds terrific, so be sure to tune in! Remember, CDL is here for you with all your Bold and the Beautiful spoilers, news, and updates. We’ve got you covered!