The Bold and the Beautiful Spoilers: Wednesday, December 30 Recap – Liam Prepares To Confess To Hope 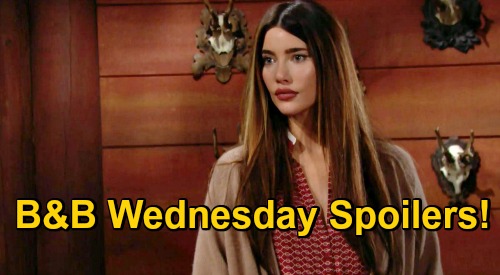 The Bold and the Beautiful spoilers recap for Wednesday, December 30, reveal that Hope Spencer (Annika Noelle) demanded to know what Steffy Forrester (Jacqueline MacInnes Wood) and Liam Spencer (Scott Clifton) were arguing about in the cabin. Liam was about to spill the whole truth, when Steffy interrupted him.

“He was planning a romantic dinner, and I said make it a surprise,” Steffy interjected, catching Liam off guard. Hope bought it, and she thought that it was a sweet gesture on Liam’s part. “I feel bad that I ruined the surprise,” Hope gushed.

Steffy told Hope and Liam to enjoy their life together and that nothing was more important. Liam looked miserable.

After Steffy left, Hope thought that Steffy had been acting weird, and she noted that Liam seemed like something was bothering him. Hope wondered if Liam’s mood had to do with the fact that Thomas Forrester (Matthew Atkinson) moved into the main house.

“Is that what’s bothering you?” Hope asked. Liam said he wasn’t thrilled about it.

Hope went on, saying that it was scary to think of how the whole situation with Thomas could have turned out, and Liam flashed back to his affair with Steffy. Liam told Hope that the mannequin had really looked like her, and Hope said that they didn’t need to rehash things.

Liam then prepared to tell Hope the truth. “One misunderstanding can set off a chain of events,” Liam said. “What are you talking about?” Hope asked warily. Liam said that he loved Hope and that there was something he had to tell her. “There’s something you need to know,” Liam said seriously.

Wyatt and Flo got to know Finn, peppering him with questions, which Finn good-naturedly answered.

Flo gushed over Finn’s fitness, which humorously outraged Wyatt. Through their conversation, Flo and Wyatt learned that Finn’s relationship with Steffy was the real thing and not just a fling.

Finn said that he’d take good care of Steffy. Just then, Steffy walked in holding a paper bag and she greeted Wyatt and Flo happily.

Steffy sat down and was happy that Finn had let himself into the house earlier. Steffy told Finn that Thomas was staying at Ridge Forrester (Thorsten Kaye) and Brooke Forrester’s (Katherine Kelly Lang) house, and that she’d never forget how Finn helped Thomas.

Finn said that he’d always put himself between Steffy and whatever might cause her pain.

Steffy said that Finn couldn’t protect her from herself, and Finn wondered what that meant. Steffy said that she was just impulsive sometimes, and Finn said that if trouble came, then they’d see it through together. “You’re not alone anymore, Steffy. I got you,” Finn said. “I hope so,” Steffy said.

In the Forrester Creations CEO office, Ridge told Paris Buckingham (Diamond White) that he was impressed with her, and that she should really consider staying in Los Angeles.

Paris said that she came just for a visit at first, but that now it was a definite possibility that she might stay. “Think about it – I hope your answer is yes,” Ridge said.

Over in the design office, Carter Walton (Lawrence Saint-Victor) told Zoe Buckingham (Kiara Barnes) that he was confused about her reaction to Paris’ job offer. Zoe said that she was opposed to Paris working at Forrester in any capacity.

Carter wondered if there were issues between Zoe and Paris, and Zoe again insisted that Paris could NOT work for Forrester.

“Where is this coming from?” Carter asked. Zoe said that there was possible fallout if Paris came to work there, and that Paris working at Forrester Creations just didn’t sit right.

Zoe explained that Paris was too young and inexperienced, and that if something didn’t go right with her appointment, then it could blow back on Carter.

“Let Ridge find someone else – it could ruin everything,” Zoe said. “I know this sounds bad, but I don’t want this to backfire on you,” Zoe continued. Carter said that maybe Zoe was right.

Zoe said that she knew she was right. “I’ll track down Ridge and head him off before he makes an offer,” Carter agreed. “I trust you if it doesn’t feel right.”

That was a terrific episode of B&B – you won’t want to miss tomorrow’s episode, so stay tuned! Remember, we’ll keep you informed about all the hot new Bold and the Beautiful spoilers, updates, and news. Here at CDL, we’ve got you covered!