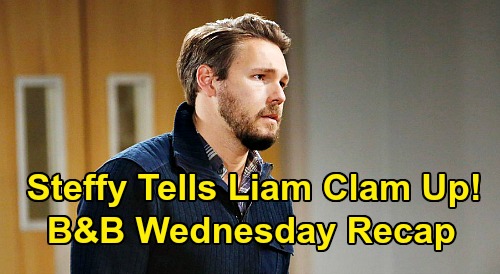 The Bold and the Beautiful spoilers recap for Wednesday, December 9, reveal that Steffy Forrester (Jacqueline MacInnes Wood) was emotionally upset as she talked with Liam Spencer (Scott Clifton) in the waiting area at the hospital.

Steffy wanted to know if Liam was positive that Thomas Forrester (Matthew Atkinson) had kissed the mannequin rather than Hope Spencer (Annika Noelle), and Liam said that he was.

Steffy was miffed, saying that Liam had been SO certain that he’d seen Thomas and Hope kissing. Then Liam disclosed that Hope knew that Liam thought he had seen her kissing Thomas. “Does she know everything else?” Steffy asked, horrified.

Liam said no. “Why do we keep doing this to ourselves,” Steffy fumed at Liam. “Just say it! You’re staying with Hope!”

Liam said that he was sorry and that this was 100% on him. “I can’t believe what I’ve done to Hope and to you,” Liam told Steffy.

Liam then said that he’d have to tell Hope what happened, and Steffy hit the roof, saying that Liam could lose everything, and that she could lose her relationship with John “Finn” Finnegan (Tanner Novlan). “My God, what have I done,” Liam lamented.

In another waiting area, Hope talked with Ridge Forrester (Thorsten Kaye), saying that he had been trying to call Eric Forrester (John McCook) but was getting no answer.

Hope said that Douglas Forrester (Henry Joseph Samiri) still didn’t know what had happened. Ridge lamented about having just seen Thomas this morning, and how Thomas said that he admired Hope.

Hope explained about the family dinner that she, Thomas, and Douglas had the night before, and Ridge said that he was grateful that Hope was with Thomas when he collapsed. Hope said that she cared about Thomas.

Suddenly, Finn popped in the waiting room to give an update on how the surgery was going.

Finn said that Thomas was hanging in there, and that it was too early to talk about outcomes. But the good news was that there were no complications during the surgery, and that the surgeon managed to relieve the pressure on Thomas’ brain.

Finn said that he’d come back and let them know when Thomas was in recovery, and that they were doing everything they could for him.

Shauna said that she had heard about how Quinn surprised Eric in Monte Carlo, and she noted that Eric couldn’t bring himself to remove Quinn’s portrait from the living room.

Eric’s phone rang, which he ignored, and Shauna explained once again that she was just as responsible for the whole Vegas scheme as Quinn was. Eric said that the house was empty without Quinn, and Shauna said that it didn’t have to stay that way, but Eric said that he was torn because Quinn broke his trust.

Shauna thought that Quinn deserved the chance to defend herself.

Eric noted that Quinn was upset with Shauna, and Shauna said that she could understand how Quinn feels. After more talking about how Shauna and Quinn were like sisters before, Shauna again said that Eric needed his wife back.

After Shauna excused herself and left, Eric stood alone in the living room and gazed up at Quinn’s portrait. Quinn came out from hiding and said, “Are they still the same color blue?”

That was a great episode of B&B, and there’s plenty more drama coming tomorrow, so stay tuned! Stick with the CBS soap and remember that CDL has you covered with all the latest Bold and the Beautiful spoilers, daily episode recaps, and news.