BY hellodrdavis on February 11, 2020 | Comments: 2 comments
Related : Soap Opera, Spoiler, Television, The Bold and the Beautiful 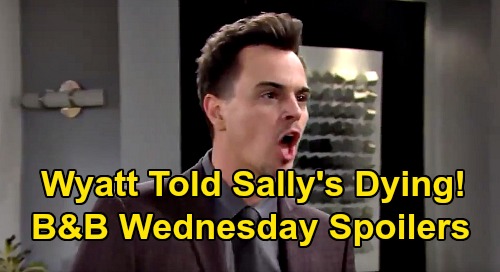 The Bold and the Beautiful spoilers for Wednesday, February 12, tease that Thomas Forrester (Matthew Atkinson) will unleash his next big plan designed to draw him closer to Hope Logan (Annika Noelle). As B&B viewers know, Thomas has just revealed to Vinny Walker (Joe LoCicero) that he plans to throw Zoe Buckingham (Kiara Barnes) a surprise party at Forrester Creations.

According to Thomas, he’s planning on letting Douglas Forrester (Henry Joseph Samiri) see him canoodling with Zoe, which he assumes will make Douglas’ head spin.

Of course, he knows that Douglas wants him to be together with his Mommy Hope, and so Thomas wants to provoke a reaction from Douglas. He’ll know that Hope will be bothered by Douglas’ reaction, and he’s hoping that she’ll then consider embarking on a relationship with him.

It’s kind of a convoluted plan, but according to B&B spoilers, Thomas will certainly get a big reaction from both Douglas and Hope. Douglas will likely lament about not wanting his father to be with Zoe and wanting his parents to be together, and Hope will notice.

Of course, she’s nowhere close to actually wanting to be with Thomas right now, but she did just defend him to Brooke Forrester (Katherine Kelly Lang), so it looks like Thomas has made some inroads via his manipulations. We’ll see where he stands after Wednesday’s party for Zoe.

And shortly after that, Sally called and demanded that Katie not tell anyone – especially Wyatt Spencer (Darin Brooks) – about what’s going on. However, B&B spoilers say that Katie will end up telling Wyatt about Sally’s diagnosis, that she’s dying with only one month to live, which will absolutely break Wyatt’s heart.

This news will be horrifying for Wyatt, and he likely won’t want Sally to face her terrible death on her own, but Katie will probably warn him to proceed with caution. She knows that Sally is currently trying to control who knows, as it’s really the only thing left in her life that she has control over.

But Wyatt will surely want to go to Sally and give her his support. He still cares deeply about Sally, but he knows that it’s a delicate situation, given that he recently told her that he wanted to break off their engagement.

And since he knows Sally very well, he’ll probably realize that she might not be receptive to him at this point because she’ll think that he’s pitying her and feels obligated to help her.

We’ll see what Wyatt chooses to do from here. He may want to spend a little time processing the news before he runs right to Sally. B&B spoilers say that he’ll get some support and comfort from Flo Fulton (Katrina Bowden) as he deals with the news about Sally, so perhaps she’ll be able to offer some advice for him on how to proceed.