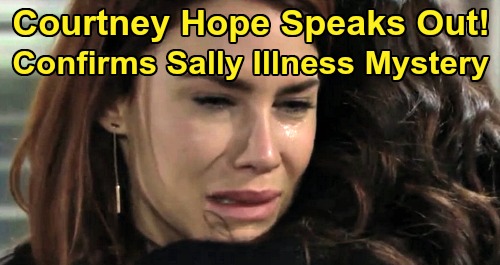 The Bold and the Beautiful (B&B) spoilers reveal that Sally Spectra’s (Courtney Hope) troubling symptoms left fans wondering what was wrong. B&B really played this up for drama’s sake, so most of us were eager to find out exactly what Sally was facing. This could’ve been a good opportunity to highlight a specific illness and connect with fans whose lives had been touched by it.

However, that’s not the route The Bold and the Beautiful writers chose to take. Sally’s illness wasn’t revealed – and it turns out it won’t be named according to Hope in a recent interview. She spoke to TV Insider about this heartbreaking storyline and her thoughts on the decision to leave Sally’s illness a mystery.

“I see why [Sally’s specific condition] won’t be named, but I can see both reasons for doing so,” Hope said. “Selfishly, I wanted to sink my teeth into something as an artist and to be an advocate for it, but I respect the decision not to do that. You want people to have outlets of hope and positivity. Ultimately, this story is about the fight that Sally is facing.”

On Twitter, some B&B viewers have voiced frustration over this writing choice. After all, The Young and the Restless is currently playing out a gripping breast cancer storyline – one that wouldn’t have the same impact without the official diagnosis.

Even if The Bold and the Beautiful wanted to leave this part of the story open, there were other ways to do that. Last year on Y&R, Victor Newman (Eric Braeden) faced a rare blood disorder that put his life in jeopardy.

It’s easy to narrow something like this down without making it too specific. A little information goes a long way when it comes to satisfying fans.

Since The Bold and the Beautiful writers didn’t offer much beyond a terminal diagnosis, some viewers are calling them out for not doing enough. “Keeping the illness a damn mystery prevents viewers from investing in the actual story,” one B&B fan insisted. “Seriously? Are we never going to know what illness Sally has? smh,” complained another.

“Couldn’t afford a medical consultant to actually give you a legitimate illness for Sally? Lazy lazy writing,” said one more irritated viewer.

On the bright side, this could leave the door open for a miraculous cure and recovery. Then again, it could make it that much easier to kill Sally off! There are no rules without a firm diagnosis, so it’ll be interesting to see how it all turns out in the end.