BY Heather Hughes on February 12, 2020 | Comments: one comment
Related : Soap Opera, Spoiler, Television, The Bold and the Beautiful 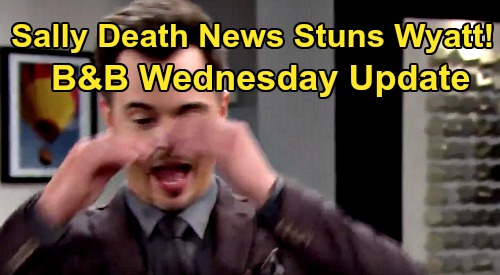 The Bold and the Beautiful (B&B) spoilers update for Wednesday, February 12, teases that Wyatt Spencer’s (Darin Brooks) heart will sink when he learns a terrible secret. Katie Logan (Heather Tom) knows Sally Spectra (Courtney Hope) wants to keep her deadly diagnosis quiet. However, Katie’s struggling with the idea of hiding it from Wyatt. How can she keep Wyatt in the dark when he’s already so concerned?

Wyatt deserves to know those concerns are warranted – at least that’s what Katie will decide. She already blabbed to Bill Spencer (Don Diamont), but it’ll be Wyatt’s turn to hear the news next.

Wyatt’s first reaction may be one of denial. He might argue that surely there’s been some mistake, but Katie will insist Sally’s indeed dying. Sally only has one month to live, so it’s a tough blow to take.

Once Wyatt gets updates and accepts Sally’s situation, B&B spoilers say he’ll want to be there for her. Wyatt will declare that no one should have to go through something like this alone. Katie will agree and point out that she intends to support Sally throughout her ordeal.

Unfortunately, Sally didn’t want Wyatt in the loop. As a result, Katie will push Wyatt to stay tight-lipped about what she’s told him. Of course, Wyatt will wonder how in the world he’s supposed to do that!

Katie can’t just drop a “Sally’s dying” bomb and expect Wyatt to carry on like everything’s normal. Wyatt will have to make some difficult decisions about how to handle all this soon enough.

Other Bold and the Beautiful spoilers say Thomas Forrester (Matthew Atkinson) will gear up for the next phase of his plan. Thomas hopes to get a big reaction out of Douglas Forrester (Henry Joseph Samiri) at Zoe Buckingham’s (Kiara Barnes) birthday bash. After Thomas surprises Zoe with this fun party, he’ll happily flaunt his new romance in front of a distraught Douglas.

B&B fans know Douglas is quite fond of Mommy Hope Logan (Annika Noelle). He won’t like the idea of Zoe stealing Hope’s spot, especially since Thomas has filled Douglas’ head with visions of the perfect “Thope” family.

Zoe doesn’t fit in that picture, so an upset Douglas will run to Hope and voice his complaints. It’ll leave Hope worried about Thomas going overboard and making things harder on Douglas.

The Bold and the Beautiful spoilers say Hope will confront Thomas before long, but he’ll hurl some accusations of his own. These two will spar over who’s doing the most damage to Douglas later this week, so don’t miss that tense faceoff.

It sounds like Thomas is stirring up big trouble as usual. The guy’s bad news, but The Bold and the Beautiful spoilers say Thomas will truly try to reform down the road. We’ll see how that works out for him! Be sure to check back for updates on Thomas and what he’s cooking up next.