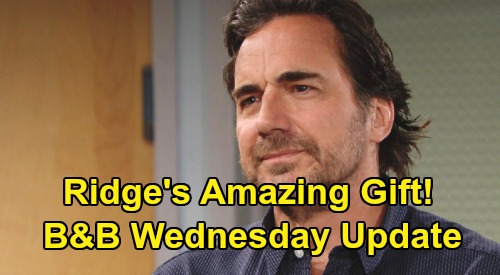 The Bold and the Beautiful (B&B) spoilers update for Wednesday, February 26, teases that Ridge Forrester (Thorsten Kaye) and Steffy Forrester (Jacqueline MacInnes Wood) will be in full agreement. Now that they know about Sally Spectra’s (Courtney Hope) terminal illness, they can’t fire her and add to her sorrow. Steffy and Ridge would much rather lift Sally’s spirits in these final weeks instead.

With that in mind, a new plan will form. Ridge will decide to take a closer look at Sally’s designs and see what can be salvaged. Once Ridge finds the heart of Sally’s vision, he’ll be able to make some adjustments and come up with something great. The Bold and the Beautiful spoilers say Ridge will include these altered designs as part of his couture collection at Forrester Creations.

It won’t be long until Sally comes along – most likely expecting more criticism or even the boot. Sally will be caught off guard when Ridge offers praise instead. He’ll show off the tweaked designs and insist Sally was off to a great start. Ridge will undoubtedly minimize his own contribution and assure Sally that her vision is what made her fashions special.

Sally will probably get choked up over Ridge’s unbelievable gift. She’ll be incredibly grateful, but she may wonder if her success is really due to her talent alone. Sally didn’t want Katie Logan (Heather Tom) spilling her deadly diagnosis, but that’s exactly what Katie’s been doing. Although Sally will confront Katie by the end of the week, she may choose to savor this career victory for now.

In the meantime, Flo Fulton (Katrina Bowden) will rejoin Wyatt Spencer (Darin Brooks) and once again back him up on supporting Sally. Flo was already convinced it was the right decision, but she’s even more convinced now.

Listening in on that conversation between Wyatt and Sally was difficult, but Flo knows what has to be done. She can tell Sally desperately needs Wyatt to face this scary march toward death. Sally shouldn’t have to deal with it alone; she deserves love and someone in her corner to the somber end.

Of course, that end may not be so somber after all! The Bold and the Beautiful spoilers, updates and news say Sally will at least survive past what her doctors predicted. A full-blown recovery is possible at some point, but Wyatt currently believes Sally’s fading fast.

In Wednesday’s B&B episode, Wyatt will share some sweet moments with Flo, who he’ll have to say goodbye to for now. They can’t be together while Wyatt devotes this time to Sally, but Flo will think it’s just a temporary sacrifice. Will she end up being wrong about that?