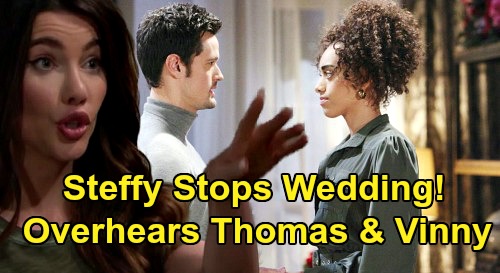 The Bold and the Beautiful (B&B) spoilers tease that Thomas Forrester (Matthew Atkinson) has plenty more criticism headed his way. B&B fans know Vinnie Walker (Joe LoCicero) has been giving Thomas a hard time about his plot and what it’s doing to Douglas Forrester (Henry Joseph Samiri). It’s not right to put the kid through so much emotional turmoil.

During the week of March 2-6, Vinnie will once again scold Thomas for manipulating his son. Douglas is just an innocent little boy. He doesn’t deserve to be used for Thomas’ selfish gain, but Thomas doesn’t view it like that. Once Hope Logan (Annika Noelle) caves in, Thomas feels they can have all a perfect family. He’s justifying his actions as beneficial to Douglas in the end.

The Bold and the Beautiful spoilers say Vinnie will scold Thomas again, but it won’t do any good. Thomas is only going to make matters worse by kicking his wedding plans into high gear.

Thomas will feel like he needs to get Zoe Buckingham (Kiara Barnes) to the altar ASAP. Thomas may believe it’ll really push Douglas over the edge and convince Hope to end this Zoe madness.

Other Bold and the Beautiful spoilers say Steffy Forrester (Jacqueline MacInnes Wood) will do some eavesdropping. She’ll overhear a discussion not meant for her ears, so it may be this one.

Thomas believes he can speak freely with Vinnie, but it’ll be a huge issue if Steffy’s listening in. She’ll realize Thomas is the same old user and abuser he’s been for months.

Naturally, Steffy’s going to fly off the handle and confront her brother. She’ll probably urge Thomas to break things off with Zoe. Steffy won’t want Thomas to hurt Zoe any more than he already has.

Of course, Thomas won’t want to do that when he’s so close to locking in a future with Hope. He’ll push Steffy to keep her mouth shut and will move forward with these speedy Zoe nuptials.

The Bold and the Beautiful spoilers, updates and news say Steffy will start to panic. She’ll feel like Thomas is out of control and in need of an intervention.

Steffy may worry about just how far Thomas will go to achieve his goals. Armed with Thomas’ true motives, Steffy may take drastic action to prevent this wedding from being completed.

It looks like Steffy will put a desperate scheme in motion as the wedding draws near, so stay tuned for some great drama. As other news rolls in, B&B fans will want to check out all the details here at CDL. We’ll have lots of Bold and the Beautiful spoilers and updates to pass along.