The Bold and the Beautiful Spoilers Next 2 Weeks: Sally Reunites With Wyatt – Vinny Rebels Against Thomas Douglas Damage 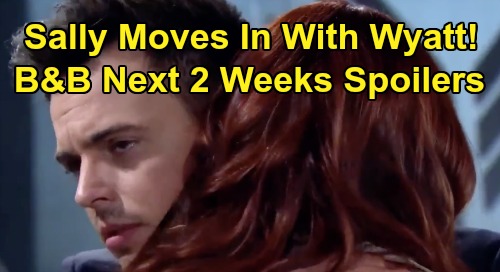 The Bold and the Beautiful (B&B) spoilers for the next two weeks February 24 to March 6 tease that some bombshells are brewing. During the week of February 24-28, Hope Logan (Annika Noelle) will make a startling move. She’ll burst in on Thomas Forrester’s (Matthew Atkinson) intimate moment with Zoe Buckingham (Kiara Barnes), so that’s sure to make a few waves!

Hope will presumably blast Thomas over how he’s hurting Douglas Forrester (Henry Joseph Samiri). His recent proposal will leave Hope with major concerns, but Thomas may remind hope that she has the power to change all this.

He’d rather move on with Hope instead and now Douglas has even asked Hope to marry Daddy in Zoe’s place. Thomas will feel like he’s got Hope right where he wants her.

Over with Brooke Forrester (Katherine Kelly Lang), she’ll reach an agreement with Ridge Forrester (Thorsten Kaye). Brooke will offer to forgive Thomas and put the past behind her, but he’ll want Thomas to fully move on with someone new first. She’ll expect to see signs of a deep, meaningful relationship – not just a show that’s meant to lure in Hope.

Ridge will think Thomas has something genuine with Zoe, so it looks like he’ll accept Brooke’s offer. He’ll be eager to repair his marriage and will truly believe this marriage is going to happen.

Next, Katie Logan (Heather Tom) will be on a mission to help Sally Spectra (Courtney Hope). She won’t want Sally to lose her job while she’s dying, so she’ll make a passionate plea at Forrester Creations.

Ridge and Steffy Forrester (Jacqueline MacInnes Wood) will soon know exactly what they have to do. It sounds like there’ll be more secret spillage since they’ll cater to Sally’s needs and try to make her feel special.

Sally will be floored when Ridge admits he’s salvaged her designs. He’ll insist that he’s making them part of his couture collection, so Sally will be both touched and confused.

As for Wyatt Spencer (Darin Brooks), he’ll continue to fret about Sally and how she must feel all alone. Flo Fulton (Katrina Bowden) won’t think Wyatt can sit back and watch Sally suffer on her own. He has the power to bring joy to Sally in these last weeks of her life, so Flo will want him to reunite with her.

Wyatt will agree it’s the right call under the circumstances. He’ll reveal this reunion plan to Sally, who’ll be taken aback – particularly when Wyatt wants her to move in.

Sally will have to think about that since Wyatt recently broke things off again. Between what’s going on at Forrester and this development with Wyatt, Sally will begin to suspect her deadly diagnosis news is spreading.

Back with Flo, she’ll share a sweet moment with Katie as they discuss the sacrifice for Sally’s sake. Katie will think Flo’s amazing for once again making such a selfless move. Bill Spencer (Don Diamont) will also compliment Flo in front of Katie. Even a guy like “Dollar Bill” will be impressed by how Flo’s handling all this.

Katie will eventually be interrogated by Sally, who’ll demand to know if Katie spilled the beans. It looks like Katie may admit to it, so she should get an earful from Sally. Nevertheless, The Bold and the Beautiful spoilers say Katie will stand her ground on thinking she made the right choice.

Sally will also have some tough moments along the way. She’ll have times when she nearly keels over, so it’s clear that she’s rapidly declining. During the week of March 2-6, Wyatt will think they have to make the most of their time together. He’ll want to help Sally cross off some fun bucket list items and go on an adventure before her looming death.

As for Thomas, B&B updates say he’ll put another plot in motion. Thomas will keep raising the stakes when it comes to Douglas. He’ll use his son’s sorrow to his full advantage, which will lead to Vinny Walker’s (Joe LoCicero) growing fears. Vinny will lash out at Thomas and do his best to put a stop to the madness. He won’t want to see Thomas do severe emotional damage to his son.