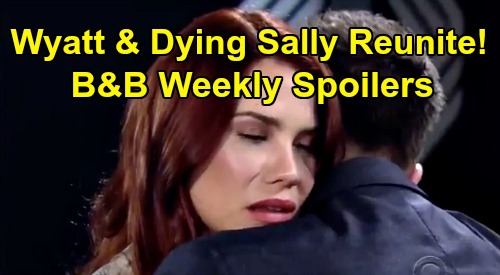 The Bold and the Beautiful (B&B) spoilers preview for the week of February 24-28 teases that sacrifices will be made. Sally Spectra (Courtney Hope) is fading fast and doesn’t want anyone to know about her deadly illness. Of course, Wyatt Spencer (Darin Brooks) is already in the loop thanks to Katie Logan (Heather Tom) and has filled Flo Fulton (Katrina Bowden) in as well.

In the week ahead on B&B, Wyatt and Flo will discuss what happens next. Since Wyatt still cares about Sally and doesn’t want her to suffer alone, Flo will push him to go be with her.

Flo will insist they should put their own relationship on hold and just focus on giving Sally what she needs. Sally has less than a month to live, so she deserves to have some bliss in her final moments.

Flo will point out that she’s got all the time in the world to be with the man she loves. She’ll look forward to the rest of her life with Wyatt, but Sally has to come first right now. The Bold and the Beautiful’s weekly preview video shows Flo saying, “You need to be there for her, Wyatt. We can’t make her well, but YOU can make her happy.”

Later, Wyatt will have a powerful heart-to-heart with Sally. After Sally admits she still loves Wyatt, he’ll insist he wants to focus on now. Wyatt will just concentrate on Sally standing right in front of him and how much he desperately wants to hold her. Sally will fall into Wyatt’s tight embrace and suggest he doesn’t know how much she needed this.

Wyatt will actually have a pretty good idea since he’s aware of Sally’s deadly diagnosis, but he’ll pretend he’s in the dark. Since Sally didn’t want anyone to know, Wyatt will think this is the next best thing to respecting her wishes. He’ll eventually ask Sally to move in with him, which will raise some red flags.

Sally will bring up Flo and the fact that Wyatt literally just dumped her to be with his ex. She won’t really understand this sudden change of heart, but Wyatt will pretty much just gloss over everything.

Wyatt will keep repeating his “now” mantra and try to reel Sally back in with that. Sally only has now, so that should indeed be quite appealing.

The Bold and the Beautiful spoilers, updates and news say Sally will ultimately confront Katie and demand to know if her secret was spilled. It’ll be interesting to see if Katie comes clean or fibs that she was a vault. B&B fans can expect some hot drama either way!

Are you glad Sally will get some support from Wyatt? Do you think Sally will be miraculously cured before time runs out? Don’t miss all our exciting Bold and the Beautiful spoilers, news and updates.