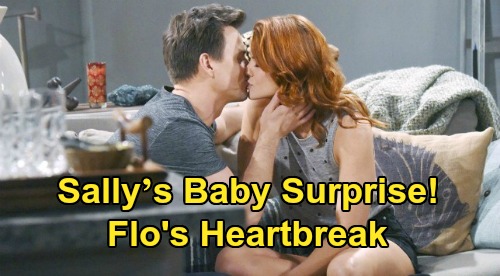 The Bold and the Beautiful (B&B) spoilers tease that there may still be hope for Sally Spectra (Courtney Hope). This whole deadly diagnosis story just seems a bit too simple, doesn’t it? There has to be more to it than Wyatt Spencer (Darin Brooks) taking a break from Flo Fulton (Katrina Bowden) for a few weeks. There’s no point to all this if Wyatt simply reunites with Flo after Sally’s demise.

Instead, it seems far more likely that Sally will miraculously recover, so that could really throw Wyatt for a loop. It could leave Wyatt conflicted, especially after he grows closer to Sally during what he assumes are her final weeks.

Wyatt will remember all the wonderful things he loves about Sally. He’ll watch her fight and handle this illness with so much strength. Falling back in love is only natural.

Flo will fully approve of Wyatt being with Sally until the bitter end. Of course, she won’t realize the end may not come until Sally’s old and gray! Nevertheless, it seems Flo will completely step aside while this “Wally” reunion happens.

Will Wyatt sleep with Sally as part of that reunion? Flo may assume that’ll be the case, but she won’t assume Sally’s going to survive behind that one-month mark she was given.

What happens once Sally exceeds her doctors’ expectations? Since B&B’s probably going to be handing out miracles, why not give Sally a little bundle of joy while they’re at it? It’s about time for another baby story, and this would certainly be a good one.

Just imagine if instead of dying, Sally lives and realizes she’s pregnant with Wyatt’s child. Now imagine what a shock that’d be for Flo!

Wyatt might determine that he has to make the most of this second chance with Sally. It could all seem very meant to be at that point. Wyatt would probably stick with Sally and hope to raise a sweet family together.

That’s something many Bold and the Beautiful viewers would like to see. It’d be nice to have some positive updates on Sally’s health and some baby news to go along with it.

Some fans feel Sally deserves better than Wyatt, which is probably true based on how he’s treated her. However, there’s the opportunity for Wyatt to do better. He could truly choose Sally and finally treat her right.

That’d leave the door open for a heartbroken Flo to move on with someone else or even hit the exit door if that’s the way B&B wants to handle it. Whatever the case, The Bold and the Beautiful spoilers say some twists could be coming up in Sally’s storyline. Will a surprise baby be one of them?

Would you like to see a pregnancy for Sally and some happiness at the end of all this? We’ll keep you posted on all the latest updates and news, so don’t miss all our Bold and the Beautiful spoilers.