The Bold and the Beautiful Spoilers: Will Thomas and Sally Reboot After Miracle Recovery – Thomas Needs Better Option Than Hope & Zoe?

BY Heather Hughes on February 22, 2020 | Comments: one comment
Related : Soap Opera, Spoiler, Television, The Bold and the Beautiful 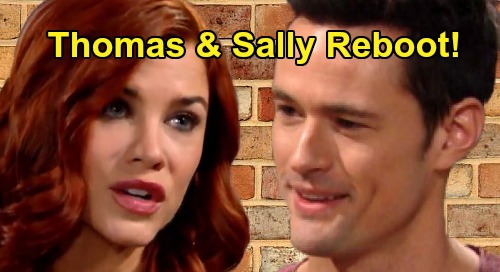 The Bold and the Beautiful (B&B) spoilers tease that Thomas Forrester (Matthew Atkinson) will continue plotting his reunion with Hope Logan (Annika Noelle). He’s still obsessed with Hope and is willing to manipulate her in any way he can. The same goes for Zoe Buckingham (Kiara Barnes), who’s being used and set up for heartbreak.

B&B spoilers, news and updates for 2020 have insisted Thomas would truly try to reform, but there are no signs of that yet. Thomas is being his usual creepy self and neither of these love stories seem to have long-term viability.

That could change if Thomas changes, but he’s not a good guy at this point. There’ll have to be a shift in Thomas and even then, Hope and Zoe may not be his best options.

Is it time for Thomas to move on for real? Should he let go of his Hope infatuation and perhaps find someone else besides Zoe? Although Thomas cares about Zoe and enjoys her company, it isn’t true love.

Perhaps The Bold and the Beautiful would be better off pairing up Thomas with a different love interest. There’s somebody else on canvas that might make sense down the road.

B&B fans are aware of Sally Spectra’s (Courtney Hope) deadly diagnosis, but there’s a good chance she’ll get a miracle at some point. Based on the way this story’s been set up so far, Sally will likely survive for a lengthy love triangle with Wyatt Spencer (Darin Brooks) and Flo Fulton (Katrina Bowden).

Wyatt will soon reunite with Sally in her time of need, but will this “Wally” reunion stick if she pulls through?

We all know how The Bold and the Beautiful writers like to make Sally the loser in love, so Wyatt may end up choosing Flo again eventually. Sally would be heartbroken over losing Wyatt for the umpteenth time.

Thomas could be on the verge of losing both Hope and Zoe once all his scheming is exposed. Could B&B ultimately put Thomas back with Sally and take them both in a new yet familiar direction?

This would be the first time Atkinson’ version of Thomas was paired with Sally, but there’s the potential for some hot chemistry. Although Thomas has burned Sally multiple times, maybe he’ll truly be a changed man after the blowups ahead.

Sally will also be vulnerable and always seems to land back with men who have hurt her before. The Bold and the Beautiful could easily go for a “Tally” reboot.