BY hellodrdavis on January 15, 2020 | Comments: one comment
Related : Soap Opera, Spoiler, Television, The Bold and the Beautiful 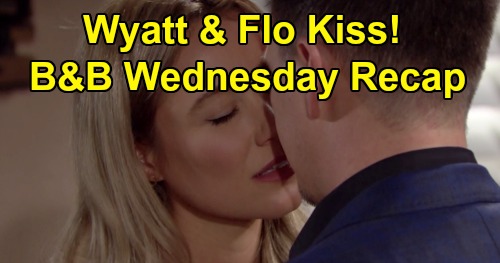 As the two were arguing over the same old things, Brooke mentioned Shauna Fulton’s (Denise Richards) name, and Ridge argued that while Shauna had nothing to do with their problems, there is something that Brooke needed to know.

Ridge pointed out that Shauna had been trying to help heal the family, while Brooke noted that Shauna would do or say anything to be near him.

Ridge then confessed that he and Shauna had become friends, and that they had kissed a few times. Brooke was absolutely outraged and couldn’t believe it. She raged at Ridge and blasted Shauna for pouncing on Ridge after Thomas successfully drove a wedge between them.

Brooke said that she predicted that Shauna would move in on him, and that she was right.

Brooke then blamed Quinn Forrester (Rena Sofer) for inviting Shauna to stay at the Forrester mansion in the first place. Ridge protested that none of this was Quinn’s fault, but Brooke barreled ahead blaming Quinn and Shauna for being in cahoots to ruin their marriage.

Brooke then vowed that she wasn’t going to let Quinn and Shauna hijack her future with Ridge.

Meanwhile, at the Forrester mansion, Quinn and Shauna happily talked about their kids. They gushed over the fact that Flo Fulton (Katrina Bowden) and Wyatt Spencer (Darin Brooks) were perfect for each other before talk turned to Brooke.

Shauna said that Ridge wanted to work on things with Brooke, so they were just friends for now and that she didn’t want to come between them.

Eric Forrester (John McCook) then came in and invited Shauna to lunch with him and Quinn, but Shauna refused, saying she was headed back to the guesthouse to be with Flo. Shauna expressed her gratitude to Eric and Quinn for letting her stay at the mansion.

Eric said that it was his pleasure, and that having her there has made Quinn very happy. Quinn seemed pleased by this, and she told Eric that nothing means more to her than their life together.

Next, in the guesthouse, Flo and Wyatt talked about their lives. Flo said how happy she was to see Wyatt again, and she wondered how his wedding plans were going.

Wyatt uncomfortably stated that he and Sally Spectra (Courtney Hope) had both been really busy lately and they hadn’t been spending much time together. They noted how happy Quinn was about that, since Quinn doesn’t want Wyatt with Sally.

Soon, they each received a text message from Katie Logan (Heather Tom) asking them to a get together. Flo immediately worried that Hope Logan (Annika Noelle) and Brooke might be there, and she wondered if Wyatt would go with her. Before they left, Wyatt told Flo that she had done

a really beautiful thing by donating her kidney to Katie. This touched Flo, and the two hugged, then kissed.

Later, Shauna was alone in the guesthouse when she decided on the spur of the moment to call Ridge, who was alone at Forrester Creations. She asked Ridge if he was free after work for drinks or dinner, but he declined, saying that he told Brooke about their kisses.

Shauna wondered what happened, and Ridge responded that Brooke was upset and that he hated having hurt her.

Back at the Forrester mansion, Eric disconnected from a call as Brooke barged in the front door. She authoritatively told Eric that “this has to stop,” and that Shauna couldn’t stay there because she’s not to be trusted. Eric protested, saying that Shauna is Quinn’s dear friend.

Brooke replied that she was trying to protect her marriage, and Eric asked what had happened.

Brooke explained that Shauna was doing whatever she can to move in on Ridge, and that she kissed him and is trying to seduce him. Up at the top of the stairs, Quinn approached and listened, as Brooke said that Shauna was making a move on Ridge and that Quinn was helping.

Eric said that Quinn wouldn’t do that, but Brooke went on about how she didn’t trust Quinn and didn’t appreciate Quinn’s portrait on the wall.

Brooke insisted that this is about human decency and that Quinn previously tried to seduce Ridge, and now Shauna is doing the same thing. Finally, Brooke said, “I want Shauna out of here and want her to take her dear friend Quinn with her!” Quinn, who was still eavesdropping, looked angry and on the verge of an attack.