BY Heather Hughes on January 29, 2020 | Comments: one comment
Related : Soap Opera, Spoiler, Television, The Bold and the Beautiful 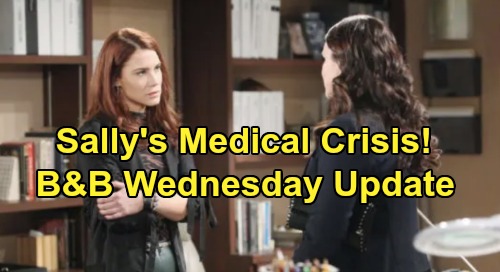 The Bold and the Beautiful (B&B) spoilers update for Wednesday, January 29, teases that Sally Spectra (Courtney Hope) will put her health first. B&B fans know Sally’s been going through a lot lately, so her stress level’s through the roof.

Sally’s been worrying about her declining work at Forrester Creations and the possibility of getting fired. She’s also had to fret over Wyatt Spencer’s (Darin Brooks) decision to call off their engagement and reunite with “Flo” Fulton (Katrina Bowden).

None of this is helping Sally’s troubling symptoms, which include dizziness and shaking that’s getting worse every day. Sally has ignored those symptoms for a while now, but she’ll choose to take the next step on Wednesday.

Since this could be a serious issue, Sally will realize she needs to get herself checked out. It’ll be difficult to push past her fears, but Sally will know it’s important to get the truth.

The Bold and the Beautiful spoilers say Sally will head to her doctor’s appointment soon. She’ll open up about the symptoms she’s battling and ask questions about the possible cause.

Of course, Sally’s doctor won’t know anything for sure without some tests and confirmation. Although Sally won’t get her diagnosis just yet, she’ll get closer and that’s crucial.

At some point in the coming episodes, Katie Logan (Heather Tom) will enter this storyline and support Sally on her medical journey.

Whatever Sally’s dealing with could be quite devastating, so Sally will be glad to have someone she can lean on. B&B viewers will be eager to watch Katie and Sally’s friendship grow.

In the meantime, Quinn Forrester’s (Rena Sofer) rage will bubble over. The Bold and the Beautiful spoilers say Quinn will decide she’s had enough of Brooke Forrester (Katherine Kelly Lang) and her out-of-control orders.

Eric Forrester (John McCook) and Ridge Forrester (Thorsten Kaye) will try to make Quinn see things Brooke’s way, but it’ll be no use. Quinn will put them in their place and speak her mind when it comes to her rival.