BY Heather Hughes on March 18, 2020 | Comments: one comment
Related : Soap Opera, Spoiler, Television, The Bold and the Beautiful 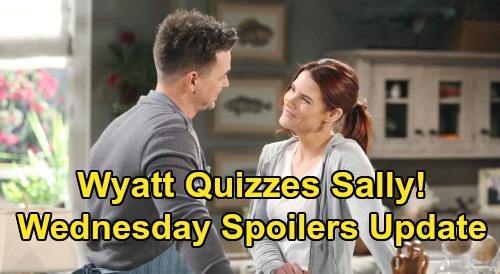 The Bold and the Beautiful (B&B) spoilers update for Wednesday, March 18, teases that Shauna Fulton (Denise Richards) will divulge a surprising secret. Shauna will open up to Quinn Forrester (Rena Sofer) about something she witnessed recently – and it’s sure to catch Quinn off guard!

It turns out Shauna was lurking outside when Brooke Forrester (Katherine Kelly Lang) and Bill Spencer (Don Diamont) enjoyed their make-out session. The Bold and the Beautiful spoilers say Shauna will provide updates on that kiss, so Quinn will be over the moon.

Since Quinn’s always eager for ammo to use against Brooke, this news will fill her devious little heart with glee.

Nevertheless, there’ll be some clashing between these besties soon enough. Despite Quinn’s push for total “Bridge” destruction, Shauna will argue that Ridge Forrester (Thorsten Kaye) doesn’t deserve that.

Since Shauna will be brought up to speed on all the wedding drama, she’ll know that Ridge and Brooke have a real shot at a future. Shauna won’t want to be the one who robs them of contentment.

Of course, B&B spoilers say Quinn will struggle to let this go. That’ll become even more of a struggle once Quinn scores video evidence later this week. It looks like Shauna filmed Brooke and Bill’s lip lock, so she’ll have cell phone footage that could blow up Brooke’s world. Quinn will be more than willing to take care of that for her, but Shauna will continue put up a fight.

Other Bold and the Beautiful spoilers say Sally Spectra (Courtney Hope) will enjoy a fun day with Wyatt Spencer (Darin Brooks) – at least as much as she can. There’s always that fear of dying just under the surface.

Sally knows her condition is terminal, so every second she spends with Wyatt inches her toward her inevitable demise.

Even so, Sally will find herself cracking a smile and letting out a laugh or two. Wyatt will be a bit of a goofball as they whip something up in the kitchen. He’ll don a chef’s hat and try to make some sweet memories with Sally.

Naturally, Wyatt will hope Sally’s going to confess her diagnosis soon. He’ll want to take that weight off Sally and fully give her the support she needs.

However, Sally doesn’t know Wyatt already knows – and she’d like to keep it that way for now. That’ll get tougher as Dr. Penny Escobar (Monica Ruiz) revs up the pressure through incessant text messages.

All the phone dinging or vibrating could make Wyatt ask what’s going on. When Sally acts cagey, Wyatt might guess this pertains to her health and keep pushing.