The Bold and the Beautiful Spoilers: Wednesday, May 13 – Quinn Steals The Show to Ridge’s Dismay – Maya & Sasha Face Off

BY hellodrdavis on May 12, 2020 | Comments: Leave Comments
Related : Soap Opera, Spoiler, Television, The Bold and the Beautiful 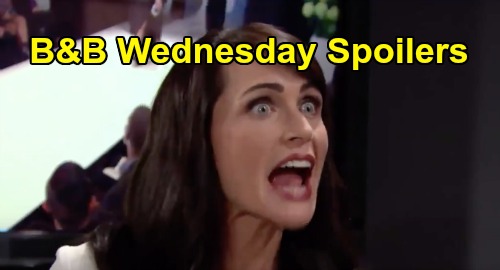 The Bold and the Beautiful spoilers for Wednesday, May 13, tease that viewers will see an encore episode that originally aired on November 11, 2016. The episode will begin as Katie Spencer (Heather Tom) visits Eric Forrester (John McCook) at the Forrester mansion. Eric will invite Katie to stay and watch the upcoming fashion show online with him, which she’ll happily accept.

Meanwhile, in the Forrester CEO office, Brooke Forrester (Katherine Kelly Lang) and Ridge Forrester (Thorsten Kaye) will be about to head to the showing, when Steffy Forrester (Jacqueline MacInnes Wood) arrives to say that she finished some last-minute alterations on the showstopper.

Ridge will remark that no one would see that particular dress today, as he wouldn’t let the dress be a footnote to Quinn Forrester’s (Rena Sofer) jewelry pass. Quinn will then arrive, all enthusiastic about the lineup for the showing. Ridge will tell Quinn that it will be a show to remember.

Meanwhile, in the backstage area, everyone will get ready for the showing. Quinn will tell Wyatt Spencer (Darin Brooks) and Ivy Forrester (Ashleigh Brewer) about Pam Douglas (Alley Mills) trying to scare her, while across the room, Pam and Charlie Webber (Dick Christie) will tell the interns the same story.

Maya Forrester (Karla Mosely) and Rick Forrester (Jacob Young) will arrive, and Quinn will try to rally the interns about the show, but they’ll walk away from her. Wyatt will reassure his mother that things will go fine, and Quinn will say that she’s just trying to integrate into the family, but that it isn’t going well. Wyatt will tell Quinn to believe in herself.

Maya will tell Rick that Nicole Avant (Reign Edwards) won’t make the show, and Rick will understand. Maya will still be in disbelief over what Zende Forrester (Rome Flynn) had done. Close by, Sasha Thomas (Felisha Cooper) will learn from Zende that Nicole changed her mind at the last minute about becoming a surrogate for Rick and Maya, and that’s why she was at the jet.

Sasha will also learn that Nicole dumped Zende after finding Zende and Sasha in bed together. Just then, Wyatt will ask Zende to take some photographs and Sasha had to get dressed, so that will cut their conversation short.

Elsewhere, Wyatt and Ivy will give Quinn some more encouragement, but Ridge and Steffy will glare at Quinn as they walk by. Brooke and Rick will take their seats to watch the showing, and RJ Forrester (Anthony Turpel) will inform them that one of the models has broken up with her boyfriend. Brooke will tell RJ to forget about the models and let them do their work.

Finally, the Forrester fashion show will get underway, with Quinn enthusiastic and Steffy and Ridge glum about the whole thing. The models will walk the runway in the beautiful Forrester gowns, while Eric and Katie watch from the Forrester mansion. Eric will say that Quinn is putting on a great event.

Backstage, Sasha and Maya will have it out, with Maya upset that Sasha and Zende slept together. Maya and Sasha will be quibbling over who is responsible for Nicole and Zende’s breakup, and ultimately Maya will refuse to walk the runway with Sasha, and vice versa. Quinn will ultimately get Maya and Sasha to do their jobs.

The jewelry pass models will then ready themselves for their walk down the runway, and they’ll make their way down the catwalk, but the audience will seem confused by the showing. Quinn and Ridge will both notice, and Quinn will say that she wanted it to be a success for Eric. Ridge will then refuse to allow the showstopper to walk the runway after the poor jewelry showing.

Quinn will slowly turn around and everyone will be shocked. From the Forrester mansion, Eric will be amused that Quinn’s modeling the showstopper. Ridge will refuse to go out on stage, but Steffy will tell him that he must. Eventually, Ridge will take the stage and Quinn will take his hand happily and hold their arms in the air. Ridge will utter under his breath – while smiling – that he hates Quinn. The crowd will cheer wildly.

That was a great encore episode of B&B, and there’s more in store for tomorrow! We’ll give you updates as more B&B news comes in. Stick with the CBS soap and be sure to keep CDL bookmarked for the latest Bold and the Beautiful spoilers, daily recaps, and news.