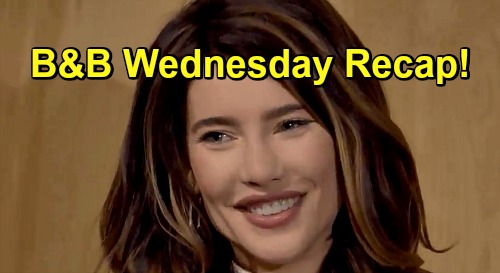 The Bold and the Beautiful spoilers recap for Wednesday, November 11, reveals that Liam Spencer (Scott Clifton) and John “Finn” Finnegan (Tanner Novlan) continued their argument in Finn’s office at the hospital.

Finn insisted that he wasn’t defending Thomas Forrester (Matthew Atkinson), and Liam griped that Thomas had Finn believing his side of things.

As Finn and Liam were going back and forth, Steffy Forrester (Jacqueline MacInnes Wood) walked in and asked what was going on. “What’s up?” Steffy asked. “Liam’s blood pressure, apparently,” Finn replied.

Steffy quickly learned that Liam was sounding the alarm to Finn about Thomas, and she looked exasperated.

Liam then mentioned the mannequin at Thomas’ place that looks just like Hope Spencer (Annika Noelle), and Finn thought that sounded off. Steffy explained that the mannequin was for design inspiration.

Steffy agreed with Finn’s basic sentiment, saying that she had talked with Hope and that she got the sense that Hope would be happier if Liam focused more on his marriage.

Liam took off, and Steffy and Finn talked happily, but then Finn got word that he had to work that evening. Steffy said that she had big plans for a romantic dinner, but that it was still nice dating a hot doctor.

Steffy and Finn flirted and were happy, and Steffy said that she was looking forward to the adventures they’d have as a couple. On her way out, Steffy told Finn that the hot doctor stereotype was totally working for him.

In the Forrester CEO office, Hope and Zende Forrester Dominguez (Delon de Metz) were working when Paris Buckingham (Diamond White) came in. Zende said that he was looking forward to the dinner later with Carter Walton (Lawrence Saint-Victor) and Zoe Buckingham (Kiara Barnes).

Hope and Zende finished up their work, and Zende left as Charlie Webber (Dick Christie) entered the office. Hope told Charlie that the missing mannequin had been found, and that Thomas had it.

Charlie blustered, wondering why Thomas never said anything about having the mannequin. Hope explained that the mannequin had been good for Thomas in a creative sense.

At Carter’s loft, Zoe and Carter talked happily and shared wine ahead of their dinner party. Carter acted mischievous, saying that he had high hopes for the evening. “What are you up to?” Zoe asked.

Just then, Paris came in and Carter asked Paris some questions about what it was like growing up with Zoe. Zoe playfully warned Paris that Carter was being very mysterious about tonight.

“I’m full of surprises,” Carter said with a big smile. Soon, Zende arrived with a bottle of wine and some flowers, which happened to be Paris’ favorite kind. Zende said he had his ways of knowing things. “I’m hoping tonight will be memorable for all of us,” Carter said happily.

At the cabin, Liam and Hope talked about the mannequin. “Thomas stole it from Forrester Creations. What does that tell you?” Liam said. Hope said that the mannequin was inspiring Thomas’ designs, but Liam didn’t buy it. Liam thought that Thomas was just as crazy and dangerous as he always has been.

Liam grumped about Hope asking Thomas to work with her again, but Hope defended her decision, saying that Thomas’ designs were exceptional. “So are Zende’s,” Liam said.

Hope said that Liam was handling her with kid gloves and that she’s not naïve…and that she believed Thomas was capable of change.

At Thomas’ apartment, the mannequin’s eyes got all red and told Thomas to keep her at the apartment so as not to disappoint Hope. “Hope wants me to be with you,” the mannequin said. “Hope is with Liam,” Thomas replied, but the mannequin said that they’d take care of Liam. Thomas looked ruffled and upset.

Later, Thomas ate dinner at the table with the mannequin sitting across from him. Thomas talked to the mannequin, saying that he was all alone in the apartment until she showed up. “I didn’t show up. You brought me here,” the mannequin said.

Thomas said that was true, and that it was nice to have company. “Your son should be with you,” the mannequin said, referring to Douglas Forrester (Henry Joseph Samiri).

“You’re Douglas’ father. He loves you. He needs you and Hope, his Mommy and Daddy. Make it happen,” the mannequin demanded. Thomas swigged a beer. The mannequin went on to tell Thomas that he wanted the real Hope, and Thomas again told the mannequin that Hope was unavailable to him.

The mannequin bashed Liam, saying that Liam was evil and was the real threat because he would two-time her again.

The mannequin’s eyes went red again and she said that Thomas needed to believe in the future he wanted and that he should get rid of Liam so that he and Hope could be together forever.

That was a great episode of B&B, and there’s much more on the way tomorrow – you won’t want to miss it. Remember, CDL is your go-to source for all the soaps, and we’ll keep you informed as more B&B news comes in. Stick with us for the latest Bold and the Beautiful spoilers, news, and daily episode recaps.