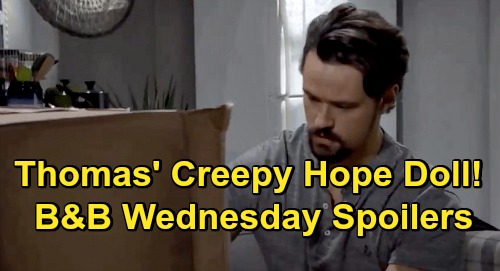 Finn and Steffy gushed over having said the “L” word to each other earlier, and suddenly Liam Spencer (Scott Clifton) appeared at the door. Liam said that he had come to apologize.

Liam went on, saying that while he still thinks that Finn crossed a line, he acknowledged that Finn wasn’t Steffy’s doctor anymore. “I was making assumptions based on what I thought you did wrong without acknowledging all the things you did right for Steffy,” Liam said.

Liam said that if Finn was the guy that Steffy wanted to move on with, then he was the guy…as long as he was good to Kelly. Steffy said that Finn cared about Kelly very much, and Finn chimed in that it was true.

Liam acknowledged that Steffy deserved to be appreciated and taken care of and loved, and he said that all he did was get in Steffy’s way. “I need to back off and I’m going to from now on,” Liam said.

“It’s time I let you live your life.” Steffy smiled and Finn asked what changed Liam’s mind. Liam said that Hope Spencer (Annika Noelle) made him see that he was wrong and had overreacted. Finn thought that Liam was just looking out for Steffy and his daughter.

But Liam said that he went about things wrong and got territorial. “My role is as Kelly’s dad, and making sure we all step up and do what’s best for her, and that’s enough,” Liam said.

Finn said that he was determined to make sure that Steffy and Kelly were happy. Steffy mentioned that even Thomas Forrester (Matthew Atkinson) was on his best behavior lately, which made Liam look askew.

Later, after Liam left, Finn and Steffy checked on Kelly, then they talked about Liam’s turnaround. Finn promised to always keep that beautiful smile on Steffy’s face, and he promised to always love her the way she was meant to be loved. Steffy and Finn kissed happily.

In the Forrester CEO office, Hope and Thomas talked about how Liam had gone back over to Steffy’s, and Hope explained that she had talked some sense into Liam about Steffy and Finn.

Hope said that she wanted all of them – including Thomas – to move forward too, and Thomas mentioned that at least Hope was willing to consider that he had changed.

In the Forrester design office, Zende Forrester Dominguez (Delon de Metz) sent the video of Zoe Buckingham’s (Kiara Barnes) singing to a guy at a record label that he knows.

Zoe and Zende talked and gushed about how they got along so well and were compatible in a lot of ways. Zoe said that she wanted to get to know Zende more, and he returned the sentiment.

Zoe and Zende said that they enjoyed talking together, and then Carter Walton (Lawrence Saint-Victor) came up in conversation, making Zoe a little uncomfortable.

In the Forrester hallway, Carter talked with Charlie Webber (Dick Christie), who again offered to help Carter navigate through the sea of romance with Zoe. Carter was appreciative, but he said that he had it covered, and that he had a big event planned for him and Zoe.

Charlie got excited and thought that Carter was going to pop the question, but Carter said that it was too early for that. Carter smiled big as he said that it would nevertheless be an evening to remember.

Back in the Forrester CEO office, Charlie lugged in a big heavy box as Thomas sat designing. Charlie said that it was a box for the Hope For The Future archives, and that the boutique had sent it back. Charlie left, and Thomas cut open the box and peered inside.

Later, Hope came in looking for something, but Thomas and the box were gone. Hope searched around for her keys as Liam came in and reported that everything went well at Steffy’s and that he said everything that needed to be said.

Liam said that he didn’t want Hope to feel disrespected again, and Hope was appreciative. Hope said that everyone seemed to be doing better, and that even Thomas didn’t seem obsessed anymore.

At Vinny Walker’s (Joe LoCicero) apartment, Thomas stood with the box in front of him. “What was I thinking bringing this here?” Thomas said. “What am I doing?” Thomas opened the box and looked inside, then sat in front of the box.

“It’s so lifelike it’s creepy,” Thomas said, and then viewers saw that inside the box was a mannequin of Hope. “Hope,” Thomas said to the mannequin.

That was a terrific episode of B&B, and there’s much more coming this week, so don’t miss the show! Be sure to keep up with CDL so you don’t miss any of the hot new Bold and the Beautiful news and spoilers going forward. We’ve got you covered!