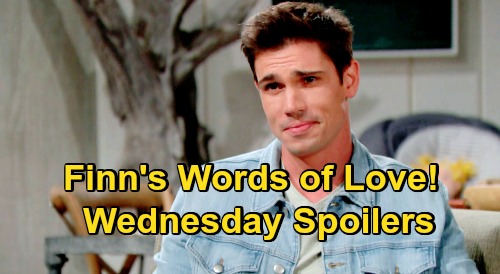 The Bold and the Beautiful spoilers for Wednesday, October 21, tease that viewers are in for some nice scenes between Steffy Forrester (Jacqueline MacInnes Wood) and John “Finn” Finnegan (Tanner Novlan).

As B&B viewers know, Steffy and Finn have just declared their love for each other in a tender moment at the cliff house. Well, on Wednesday’s episode, it looks like we’ll see Steffy and Finn talk more about the future and what it might look like for the two of them.

Perhaps we’ll learn a little more about Finn and his background, as he and Steffy talk and enjoy each other’s company. Presumably, Steffy and Finn have gotten to know each other pretty well during their visits when she was in the treatment facility, but so far viewers don’t know much about Finn and his past.

It would be nice to learn a bit more, and perhaps through Steffy and Finn’s conversation, viewers will learn about Finn’s family, upbringing, and even what drove him into the medical profession.

The Bold and the Beautiful spoilers say that Finn will make Steffy a big promise on Wednesday’s episode – he’ll promise to love and take care of Steffy in the way that she deserves.

Knowing Finn, he’ll probably extend this promise to Kelly Spencer (Colette and Avalon Gray) as well, which is something that will surely melt Steffy’s heart. And who knows, Steffy and Finn might just take their relationship to the next level and make love on Wednesday’s episode. We’ll have to wait to see!

Meanwhile, on the new episode of B&B on Wednesday, October 21, Zende Forrester Dominguez (Delon de Metz) will share one of his innermost desires with Zoe Buckingham (Kiara Barnes).

As B&B viewers know, Zoe has just sung a song for Zende, and he was totally enchanted by the experience. Zoe and Zende are definitely forging more than a professional working relationship with each other, that’s for sure.

We’ll see what Zende’s innermost desire ends up being, but he might say that he’s been looking for a muse for his designs – someone who will inspire him to be the best designer that he can be. Zoe would certainly be a candidate for fitting that bill, and it’s probably a role that she’d love to have.

But then there’s the issue of Zoe’s burgeoning relationship with Carter Walton (Lawrence Saint-Victor) to think about, so Zoe may stop short of offering to be Zende’s muse.

Ongoing B&B spoilers for later in the week say that Zoe will be back with Carter, who will end up planning a romantic evening for himself and Zoe.

Eventually, B&B spoilers say that Carter and Zoe will end up making love, so they’re going to take their relationship a step further – but where will this lead Zoe and Zende’s friendship? Things may get very awkward soon!

It sounds like a lot of B&B drama is heating up for Wednesday’s episode, so stay tuned! Stick with the CBS soap and don’t forget to check CDL often for the latest Bold and the Beautiful spoilers, daily episode recaps, and news. We’ve got you covered!