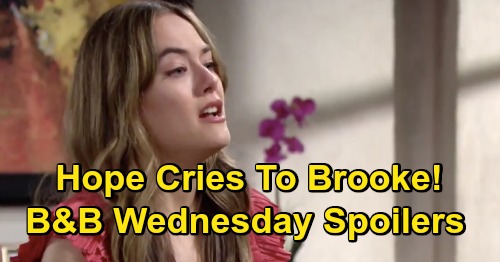 The Bold and the Beautiful spoilers for Wednesday, September 23, tease that Steffy Forrester’s (Jacqueline MacInnes Wood) anger will likely turn to full-fledged rage.

As B&B viewers know, Liam Spencer (Scott Clifton) has just told Steffy that he’s leaving the cliff house and taking Kelly Spencer (Colette and Avalon Gray) with him. Steffy looked shocked at this revelation, and we suspect that the coming interaction between Liam and Steffy is going to be explosive.

Of course, if Liam wants to take Kelly and go, it doesn’t look like there’s much that Steffy can do about it. She’s still in a haze from the pills that she took earlier, and she’s in so much pain that she probably wouldn’t be able to physically stop Liam from taking Kelly if she tried.

Steffy is likely headed for a major meltdown right there before Liam’s eyes, which will only reinforce for him that he’s making the right move by getting Kelly out of that environment.

Well, it seems that Steffy will go into full-fledged attack mode, as B&B spoilers say that she’ll end up accusing Liam and Hope Spencer (Annika Noelle) of kidnapping Kelly. Now, whether this is an accusation about the ‘Lope’ kidnapping of Kelly that she’ll simply make to Liam remains to be seen.

Ongoing B&B spoilers for later in the week say that Steffy will end up over at Brooke Logan’s (Katherine Kelly Lang) house, and that she’ll lash out at Brooke and Hope there, so we may see that begin to play out on Wednesday’s episode.

Speaking of Hope and Brooke, they’ll spend some time together on Wednesday’s new episode of B&B. After Hope’s lengthy conversation with Thomas Forrester (Matthew Atkinson) about Liam’s need to distance himself from Steffy, it seems that Hope will be feeling upset.

Of course, it doesn’t look like Hope will yet know about what’s just gone down at Steffy’s place with Liam taking Kelly, so she’ll still think that Liam is simply overreacting to the fact that another man sees interested in Steffy.

According to the Bold and the Beautiful spoilers, Hope will confide in Brooke about Liam’s apparent over-the-top reaction to the likelihood that Steffy is moving on with John “Finn” Finnegan (Tanner Novlan).

Hope will need a sounding board, and she’ll apparently vent to Brooke about how Liam seems to be a little too invested in what’s going on with Steffy.

Of course, from Hope’s perspective, Liam should be letting go and fully expecting that Steffy is going to move on with another man at some point.

Hope will understand that Liam is concerned about how Kelly will factor into the equation, but she’ll probably tell Brooke that she’s worried that there’s more going on here, and that perhaps Thomas is right, and that Liam wants to have his cake and eat it too.

Wednesday’s episode of B&B drama sounds terrific, so don’t miss it! We’ll give you updates as B&B news comes in. Stick with the CBS soap and be sure to keep CDL as your go-to source for the latest Bold and the Beautiful spoilers, daily episode recaps, and news.