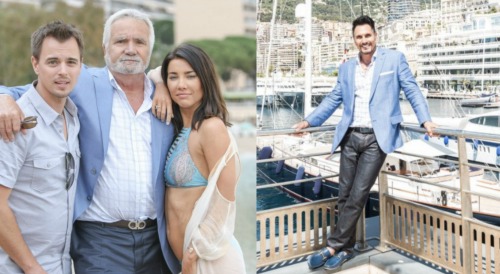 The Bold and the Beautiful (B&B) spoilers tease that the CBS soap will kick off a special event during the week of April 27-May 1. Since brand-new episodes run out on April 23, B&B has a plan in mind. They’ll need something to take the new content’s place until the COVID-19 aka coronavirus crisis is over.

The show plans to deliver some great theme weeks to keep the drama going. They’ll throw it back with fantastic episodes from the past, so we’ve got the details on B&B’s first theme week offering. The Bold and the Beautiful will actually kick things off a little early since their Friday encore episode will feature the same theme.

Get ready to head back to Monte Carlo! That’s where B&B will take fans starting Friday, April 24. They’ll continue the theme during the week of April 27-May 1, so that’ll mean six episodes for the show’s “Escape to Monte Carlo” event.

The first one will feature Forrester Creations’ charity benefit fashion showdown with Spectra Fashions. The Bold and the Beautiful viewers will recall that certainly brought lots of Monte Carlo fun! However, B&B will do something a little different for the episode airing Monday, April 27. The same goes for the episode set to air on Tuesday, April 28.

These two shows will contain documentary-style footage, which has never been shown on CBS. Some fans might have caught these specials on PopTV once upon a time, but it’ll be fresh content for everyone else. The Bold and the Beautiful will offer the scoop on how some amazing Monte Carlo scenes came together. B&B will give viewers an inside look at the location shoots in gorgeous Monaco, too.

There’ll be some interviews with the cast, so that’s definitely a great reason to watch. We’ll even see some of the crew along with B&B Executive Producer and Head Writer Bradley Bell. The Bold and the Beautiful spoilers say Bell will offer his unique insight and share what he wanted to achieve. It’ll be exciting to see this behind-the-scenes footage and hear Bell’s perspective.

Who’s ready to escape to Monte Carlo with #BoldandBeautiful? Get ready for a special theme week including never-before-seen documentary footage shot throughout Monaco! 🎥 The fun starts on Monday, April 27th. ✨ Learn more about it here: https://t.co/dWB0qP26HW pic.twitter.com/Fvrbw2u2WZ