The Young and the Restless Spoilers: New Episodes End April 23 – The Bold and the Beautiful Also – See What’s Next

BY Heather Hughes on April 20, 2020 | Comments: Leave Comments
Related : Soap Opera, Spoiler, Television, The Bold and the Beautiful, The Young and the Restless 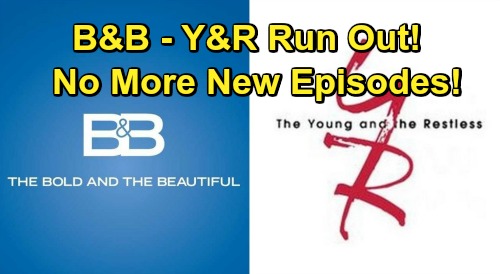 The Young and the Restless (Y&R) spoilers reveal that the CBS soap is down to its last episodes filmed prior to the COVID-19 aka coronavirus shutdown. The same goes for The Bold and the Beautiful, so let’s talk about when the final new shows will hit the screen – at least until the cast and crew can get back in the studio to film more.

According to TVLine, both The Young and the Restless and The Bold and the Beautiful will air one last new episode on Thursday, April 23. After that, both soaps will switch to classic episodes – and they have a special plan in mind that they hope fans will enjoy.

Starting Monday, April 27, Y&R and B&B will start airing theme weeks to fill the usual airtime. The Young and the Restless’ first theme week will focus on the late Jeanne Cooper and her fantastic portrayal of Katherine Chancellor.

Y&R’s calling it “Katherine the Great” week, so they really want to pay tribute to Genoa City’s beloved matriarch. If you’re a longtime fan of the show or perhaps a newer viewer who wants to see some of what you missed, these episodes will have plenty of classic moments. It should be a fun opportunity to catch up, especially since the show will throw it all the way back to 1990.

As for The Bold and the Beautiful, their first theme week will be all about Monte Carlo. In episodes from 2013-17, B&B will remind viewers of some fantastic location shoots from over the years. There’ll also be two documentary-style episodes with tons of behind-the-scenes footage. Many fans enjoy seeing how the soapy magic happens, so be sure to tune in!

Y&R and B&B will also have some cast member commentary as part of the introductions for these episodes. There’ll even be some commentary to cap off certain shows, so it’ll be nice to hear what our favorite soap stars have to say. Amy Reisenbach, CBS’ EVP of Current Programs made a statement to fill fans in on the overall plan and generate some excitement.

“It’s incredibly fun to offer fans an opportunity to look back at such memorable moments from Y&R and B&B,” Reisenbach said. “Both of these shows have extraordinary legacies, and these specially curated episodes are only a small portion of what we hope to be able to present in the coming weeks.”

Since new episodes run out this Thursday, look for some flashback episodes on Friday as well. The Bold and the Beautiful will go ahead and dip into their Monte Carlo classics. Meanwhile, The Young and the Restless will air a 1996 episode about Paul Williams (Doug Davidson) and Christine Williams’ (Lauralee Bell) honeymoon.

As more news comes in on future themes, we’ll give you updates. CDL will also have other Bold and the Beautiful spoilers and Young and the Restless spoilers to pass along as the drama continues this week!

How do you feel about Y&R and B&B’s theme weeks ahead? What themes would you like to see? Don’t forget to check back frequently for hot soap spoilers, updates and news.