The Young and the Restless Spoilers: Abby Breaks Up With Chance – Couple Divides Over Loyalty To Adam? 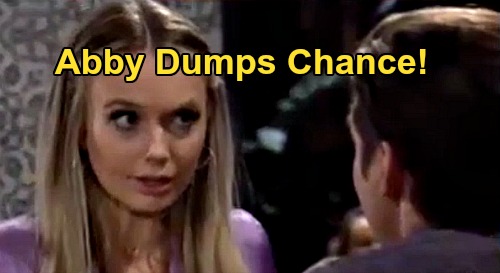 The Young and the Restless spoilers tease that Phyllis Summers (Michelle Stafford) could end up coming between Abby Newman (Melissa Ordway) and Chance Chancellor (Donny Boaz) after all. As Y&R viewers will remember, there was a period of time when both Abby and Phyllis were vying for Chance’s affection. Phyllis ultimately bowed out of the competition after sharing a kiss with Chance, and Abby and Chance embarked on a hot romance.

Well, then Abby and Chance decided to do something pretty devious to Phyllis. They conspired to steal a flash drive from Phyllis’ safe deposit box in order to protect Chance from what was on that flash drive – it was a recording of Chance and Adam Newman (Mark Grossman) discussing how Adam had killed a man in Las Vegas to protect Chance and then the two covered up the crime.

Abby dressed up looking just like Phyllis and she impersonated her nemesis at the bank, ultimately getting access to the flash drive and stealing it. From there, Chance destroyed the flash drive, and Abby and Chance celebrated their victory big time.

Turns out, it was quite a while before Phyllis discovered that the flash drive was missing, but when she did, she was absolutely livid about what had happened. Phyllis marched right up to Abby and Chance and demanded that they return the flash drive, only to find out that it was destroyed.

Abby was then horrified to learn that Phyllis had planned to give the flash drive to Nick Newman (Joshua Morrow) to use as leverage against Adam, who had just blackmailed Victor Newman (Eric Braeden) into giving him the CEO seat at Newman Enterprises.

Well, Abby then turned to Chance, hoping that Chance would help out her family in its fight against Adam. Abby even asked Chance to secretly record Adam after luring him into another conversation about what happened in Las Vegas.

But Chance promptly refused, saying that he couldn’t do that to Adam – after all, Adam had saved his life and he felt a certain obligation to him.

Well, after that, Abby got a bit chilly with Chance, even canceling their plans for that evening. And we wonder if this is going to foreshadow some serious problems between Chance and Abby going forward.

We think there’s a good chance that this could be the beginning of the end for Chance and Abby, especially if the Newman family feud with Adam causes Abby and Chance to take sides.

Chance seems completely unwilling to turn his back on Adam, given that Adam saved his life back in Vegas, and that could cause trouble with Abby, as she sides with her father, Nick, and Victoria Newman (Amelia Heinle).

Of course, Abby and Chance could decide to simply table the discussion and not let the Newman family feud get in the way of their relationship, but that would be too easy.

We think it’s more likely that Abby will continue to try to turn Chance against Adam, which will almost certainly be a nonstarter for Chance and could cause some serious friction for the couple.

Do you think that Abby and Chance’s relationship is doomed? Is Chance right to remain loyal to Adam? Stay tuned to the Young and the Restless and don’t forget to check CDL often for the latest Y&R news. We’ll keep you posted on the hot Y&R spoilers and daily recaps as well!

Cheers to a new week of #YR starting tomorrow! 🎉🎉 pic.twitter.com/K168WDwhKd