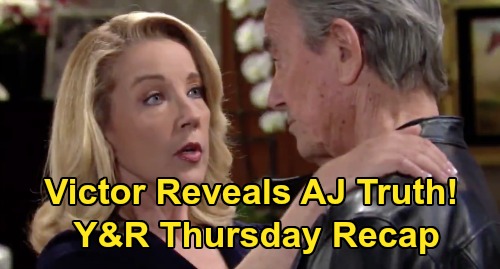 The Young and the Restless (Y&R) spoilers recap for Thursday, April 16, teases that Nikki Newman (Melody Thomas Scott) will remain agitated over Adam Newman’s (Mark Grossman) takeover plot. At the ranch, Victor Newman (Eric Braeden) will offer Nikki flowers as well as reassurance about Victoria Newman (Amelia Heinle). Victor will promise to put Victoria back in power as soon as possible.

After Victor notes that he hasn’t signed anything yet, he’ll insist that story of AJ Montalvo’s death has to stay buried. Nikki will be frustrated since Victor isn’t willing to trust her with this info.

Meanwhile, Phyllis Summers (Michelle Stafford) will arrange spa services for Traci Abbott (Beth Maitland), who’ll be at the Grand Phoenix for a little rest and relaxation.

Soon after, Phyllis will talk to Nick Newman (Joshua Morrow) about all the drama Adam’s caused. Nick will bring up the AJ dirt, but Phyllis won’t think Victor’s really guilty. After Phyllis brings up her leverage against Adam, she’ll take off to retrieve it from her safe deposit box.

At Society, Mariah Copeland (Camryn Grimes) and Tessa Porter (Cait Fairbanks) will talk about Adam. Y&R spoilers say Mariah will want to keep Sharon Newman (Sharon Case) out of all the Newman drama. Tessa will wonder if Sharon will tell Adam about her cancer diagnosis, but Mariah won’t be sure.

Mariah will, however, know about the romantic night Rey Rosales (Jordi Vilasuso) has in store for Sharon. Tessa will think it’s nice of Rey to plan something special.

Once Abby Newman (Melissa Ordway) walks over, she’ll greet the girls and get grilled about Adam. Abby will admit she’s out of the loop, although she’s tried calling for updates. They’ll all talk about how devastating this must be for Victoria.

After Chance Chancellor (Donny Boaz) appears, Abby will speak with him about the Adam situation. Chance will assure Abby that he was in the dark on Adam’s plans.

When Chance worries about Abby feeling like an outsider, Abby will insist it’s fine. The Young and the Restless spoilers say Chance will share some kind words of admiration.

Back with Mariah, she’ll tell Tessa that Abby was a good friend to her during the tour. When Mariah mentions that they went out dancing once, Tessa will wonder if they went to The Matchbox. That’ll lead to a conversation about Lindsay (Kirby Bliss Blanton), but Tessa will promise they’re past all that.

Even so, Tessa will be glad Lindsay is now working at The Matchbox again full-time. Mariah will agree that’s for the best. Over with Abby, she’ll be cornered by a furious Phyllis.

Abby will face Phyllis’ wrath for stealing the thumb drive, which Phyllis planned to give Nick. Phyllis will rant about Abby’s “brilliant move” clearing the way for Adam to get what he wants.

Afterward, Abby will speak with Chance about luring Adam into a trap. She’ll think Chance could get Adam talking about the Vegas murder again. They could make a recording to replace the one they got rid of. Since Adam saved his life, Chance won’t be willing to help take him down.

At the ranch again, Nick will get into a heated argument with Victor. The Young and the Restless spoilers say Nick won’t understand why Victor would cave in like this. Victor will want Nick and Victoria to drop their questions.

It could be dangerous for them to dig into this AJ story, but Nick will think Victor at least needs to tell Nikki.

Later, Victor will warn Nikki that if he tells her, there’s no going back. With a little more nudging from Nikki, Victor will agree to tell her everything. After Victor’s offscreen confession, Nikki will be shaken by what she’s learned.

Victor’s actions will make sense to Nikki now, but she’ll think it’s all overwhelming. Nevertheless, Nikki will feel confident that they can find a way through this together.

As for Phyllis, she’ll reconvene with Nick and let him know her Adam leverage was a bust. Nick will admit he wasn’t keen on Phyllis being in the line of fire anyway.

In Traci’s suite, she’ll speak with Jack Abbott (Peter Bergman) over the phone. After Traci thanks Jack for talking her into this R&R, she’ll continue to kick back and unwind.

In Rey and Sharon’s suite, Sharon will bring up the latest Adam mess. Although she’ll assume Rey wanted to keep that news from her, Sharon won’t want to discuss Adam anyway. The Young and the Restless spoilers say they’ll get close in bed, but Sharon will fret about what’s next.

This could be the last time they can be together before everything changes, but Rey will offer reassurance. Meanwhile, Theo Vanderway (Tyler Johnson) will catch up with Mariah and Tessa at Society. After Theo apologizes for his flirtatious actions of the past, he’ll congratulate them on “the whole ‘Teriah’ thing” going viral.

Theo will think they could make money off this, but Mariah will shut down the idea of monetizing their relationship. She’ll insist they wouldn’t want to promote their love story – and even if they did, they wouldn’t hire Theo to handle it for them.

Mariah won’t think Theo knows anything about love. It’d be like hiring the Grinch to promote Christmas.

Theo will suggest that proves Mariah doesn’t know him at all, but Mariah won’t be interested in changing that. Tessa and Mariah will give Theo a hard time about hanging out with Lola Rosales (Sasha Calle) before the conversation shifts to work. Mariah won’t feel like Theo really has anything left without Jabot.

It looks like another great Y&R episode’s in store. Theo’s downfall is inching closer, so stay tuned. Be sure to drop by CDL frequently for the hottest Young and the Restless spoilers, news and updates.