The Young and the Restless Spoilers: Victoria Learns True AJ Murder Story From Nikki – Forces Adam To Give Up Newman CEO 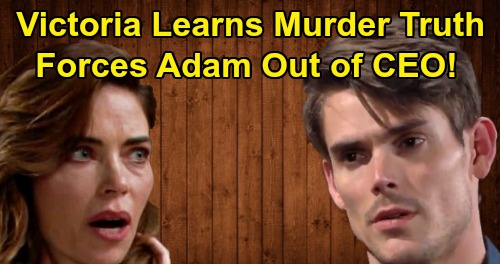 The Young and the Restless (Y&R) spoilers tease that Victor Newman (Joshua Morrow) will lose control of his latest secret. Y&R fans know Nikki Newman (Melody Thomas Scott) pushed Victor to trust her with this information, but she’s about to prove he shouldn’t have! Victor undoubtedly expected Nikki to remain loyal and keep this news to herself, but that won’t be the case for much longer.

The trouble will start when an angry Victoria Newman (Amelia Heinle) shows up ranting again. It’s understandable that Victoria is upset about losing the CEO spot. Victoria worked hard to rise to the top, but Victor just let Adam Newman (Mark Grossman) pull the rug out from under her. Since Victoria doesn’t realize there’s a deeper and darker story here, she’s got the wrong idea.

During the week of April 20-24, Victoria will complain to Nikki. She’ll have a major outburst about Daddy dearest being impressed by the black sheep of the family.

Victoria will feel like Adam’s ruthless behavior must’ve impressed Victor enough to make him cave in. Nikki will try to calm Victoria down, but Victoria will just keep going on and on about how horrible Victor is to let Adam take over.

Nikki always likes to have peace within the family, so she’ll hate that Victoria’s so furious with her father. Since Nikki knows the secret and has the power to help Victoria understand, she’ll decide to spill what really happened in Kansas.

The Young and the Restless spoilers say Nikki will confess what she knows in hopes of patching things up between Victoria and Victor. It’ll be a real shock for Victoria, but she’ll ultimately see why Victor did what he did when Adam blackmailed him.

Victoria will make a beeline to Adam’s penthouse soon after to dangle this new ammo over Adam’s head. It’ll be Victoria’s turn to gloat a little! Victoria will insist this isn’t going to turn out well for Adam. Although Victoria won’t reveal the secret, she’ll definitely warn Adam that he’ll regret it if he doesn’t back down.

The Young and the Restless spoilers say Adam obviously won’t be willing to do that, so that’ll set up more trouble. Adam will make a bold move after Victoria’s visit, which will lead to a revelation that changes his world forever.

As more Y&R details emerge, CDL will have other hot updates for you. Don’t forget to check back for exciting Young and the Restless spoiler, updates and news posts.