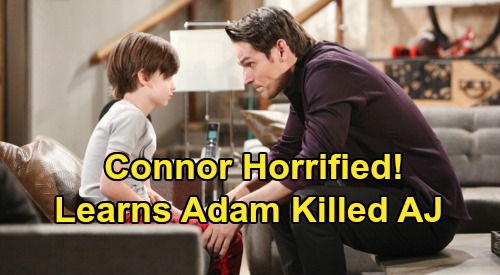 The Young and the Restless spoilers tease that Adam Newman (Mark Grossman) thinks that he’s got the world on a string. As Y&R viewers know, Adam recently blackmailed Victor Newman (Eric Braeden) by threatening to go public about Victor’s murder of AJ Montalvo. Adam is certain that his father killed AJ and conspired with the coroner to cover up his crime, especially since Victor gave in to Adam’s demands.

Well, now Adam is CEO of Newman Enterprises and he thinks that there’s no way he can lose at this point. Adam even recently told Chelsea Lawson (Melissa Claire Egan) that he no longer believes that he inherited Victor’s worst traits, and that he’s the kind of man that his son Connor Newman (Judah Mackey) can be proud of.

But it’s also the case that Victor has privately denied killing AJ to Nikki Newman (Melody Thomas Scott). And when Victor finally told Nikki the whole story about what actually happened to AJ, she seemed to understand exactly why Victor wanted to keep quiet.

It certainly sounds like Victor is protecting Adam here, which could very well mean that Adam is the one who killed AJ all those years ago.

Adam may have been a young child at the time, but he certainly could have stepped in if AJ was harassing his mother Hope Wilson (Signy Coleman) and, for example, pushed him out of the barn loft to his death.

And if that’s the case, then Adam is likely suppressing the memories of the terrible event from his childhood, which would explain why Adam doesn’t remember what happened.

Of course until Y&R reveals exactly what Victor told Nikki it remains possible that The Moustache is covering up for Hope. However The Young and the Restless spoilers are clear that Adam will suffer grave consequences when the truth about AJ’s murder is revealed and that doesn’t imply that his mom was the killer.

At any rate, it sure sounds like the truth about what really happened to AJ is going to come out at some point, and it should be explosive, especially if Adam was the killer.

If Victoria goes that route and exposes Adam’s murder as a young child, it will be all over the news, especially since Adam has made himself a big media figure as of late. Genoa City will surely be abuzz with the news about Adam’s murdering childhood, and Adam will be stunned. But how about the effect that all of this will have on Connor?

Connor currently idolizes his father, and he’d be crushed to learn that his father killed someone. We have to remember, too, that Connor recently got through a terrible time in his life where he was spiraling out of control. In reaction to Adam leaving town, Connor flung himself off the jungle gym and broke his arm, and he acted out in other ways, too.

Connor probably won’t take the news about his dad’s childhood murder well. Connor surely will have difficulty with the incident being all over the news. It could really ruin Connor’s ability to get along with the other kids as school and could cause another big meltdown for the little boy.

In fact, we could see Connor faced with a serious mental health setback as he spirals out of control and starts acting out once again. In the end, Adam’s big move in digging up dirt on Victor and using it to his advantage could really backfire and cause serious turmoil for Connor.

We’ll see what happens here, but assuming that Adam was the person who killed AJ, the ramifications for Connor could be huge. Do you think that we’ll see Connor spiral out of control when the truth about AJ comes out?

Stay tuned to the Young and the Restless and we’ll keep you posted on the latest Y&R news as it comes in. Remember, CDL is your go-to place for the hot soap spoilers and daily recaps!