The Young and the Restless Spoilers: Billy’s Passion Unleashed – Steals Amanda Away From Nate? 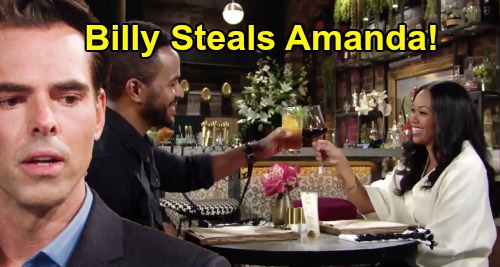 The Young and the Restless spoilers tease that Amanda Sinclair (Mishael Morgan) may find herself being hotly pursued. As Y&R viewers know, Amanda recently had a date with Nate Hastings (Sean Dominic). Amanda and Nate had a great time at Society and then went bowling, and they even shared a sweet kiss during the evening.

This was a big move for Amanda, who is finally putting the whole Ripley Turner (Christian Keyes) ordeal behind her. It’s great to see Amanda getting out and enjoying life again. But even though Amanda and Nate seem to be hitting it off well, there still seem to be some unresolved feelings between Amanda and Billy Abbott (Jason Thompson).

As Y&R viewers will remember, Amanda and Billy shared a particular closeness while Billy was going through his most recent identity crisis. Amanda and Billy even shared a kiss, and there was definitely an attraction there. Even though Amanda and Billy decided to continue on as “just friends,” it seems that there’s still a pull there.

In recent scenes, Amanda and Billy have awkwardly avoided each other out in public. In fact, Billy even showed up at Society while Amanda and Nate were there on their date.

Billy didn’t look amused at all, and he quickly bolted before Amanda could see him. Similarly, Amanda spotted Billy with Victoria Newman (Amelia Heinle) at Crimson Lights recently, and she got nervous and left, even leaving her coffee behind.

It seems that there are still some unresolved feelings between Amanda and Billy, and quite possibly some lingering attraction. And that could make things a little awkward when Amanda starts working at Chancellor Media.

According to Y&R spoilers, Amanda will end up taking the legal position there, which will put her in close contact with Billy on a regular basis.

That could lead to some real workplace tension, and it could make Billy realize pretty quickly that he’s jealous of Amanda’s burgeoning relationship with Nate.

And if Billy does start to get the jealousy bug, then he could actually start to pursue Amanda. Billy tends to just go for what he wants as a general rule, and if he decides that he wants Amanda, then he probably stands a good shot at stealing Amanda away from Nate.

After all, Billy and Amanda share a connection that runs pretty deep, and Nate and Amanda are still pretty much at a surface level.

We’ll see what happens here, but we suspect that Billy and Amanda’s story isn’t done yet. But will Amanda continue on with Nate, or will she realize that she and Billy still have unfinished business?

Keep on watching the Young and the Restless and stick with CDL for your Y&R news and updates going forward. We’ll keep you informed about all the latest Y&R spoilers as they come in!