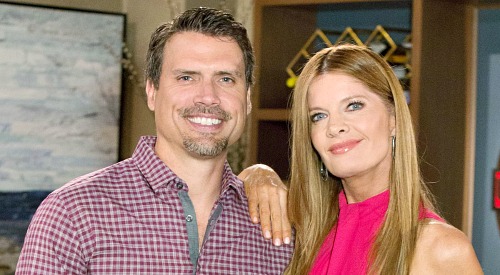 The Young and the Restless (Y&R) spoilers tease that one recently reunited couple is already headed for trouble. They don’t know it yet – or maybe they do deep down! Nick Newman (Joshua Morrow) and Phyllis Summers (Michelle Stafford) certainly had some reservations about getting involved with each other again in the beginning.

If you have to make a pros and cons list to decide if you’ll reunite, it’s probably best just to skip it entirely! The fact that Nick and Phyllis have been down this road enough to make that list is a red flag.

Nevertheless, this is just what Nick and Phyllis do. They get caught up in their spark and can’t resist, so they convince themselves it’s going to be different this time around.

Of course, it never is! Sooner or later, a “Phick” reunion always crashes and burns. In the latest issue of Soap Opera Digest, Joshua Morrow opened up about Phyllis and Nick’s decision to get back together. Although Morrow understands why this is playing out, he predicts it won’t end well for Nick and Phyllis.

“It’s not going to last forever based on their history and what they have going against them,” Morrow said. “It’s just not. But Nick and Phyllis don’t want to hear that. I don’t think Nick is saying, ‘Hey, let’s grow old and die together.’ It’s more, ‘This is the way I feel and I’m tired of ignoring it.’”

That seems like a really accurate description of what’s happening with Nick and Phyllis right now. Nick especially seems to be letting passion cloud his judgment. Phyllis’ doubts lingered longer than Nick’s, so he worked hard to convince Phyllis that he’s all in.

We believe Nick means that, but good intentions aren’t enough to keep a ship sailing smoothly – particularly on the rocky waters of a soap!

However, Morrow admitted he could see this “Phick” reconnection coming. It just happened a little sooner than he expected. Even so, Morrow’s loving the story so far and is down for whatever The Young and the Restless writers have in mind.

“The writers have their path and we’ll tell their stories,” Morrow said. “I couldn’t be more excited. I love Michelle.” Nick is definitely excited about reuniting with Phyllis as well, but how long will it take this character’s excitement to fade? Y&R fans will have to wait and see, but it’s clear that Phyllis and Nick are doomed!