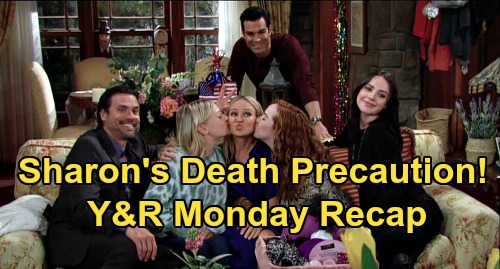 The Young and the Restless (Y&R) spoilers recap for Monday, April 20, teases that Summer Newman (Hunter King) will reassure Kyle Abbott (Michael Mealor). In bed in Kyle’s Grand Phoenix suite, he’ll discuss the upcoming pitch meeting at Jabot. Summer will think that regardless of what Theo Vanderway (Tyler Johnson) did or didn’t do, Kyle’s going to come out on top.

At Jabot, Theo will hang up after an encouraging call from Lola Rosales (Sasha Calle). When Jack Abbott (Peter Bergman) appears, he’ll give Theo a little pep talk about being himself. Jack will assure Theo that he has faith in him, but that faith will quickly fade.

As Theo delivers his “Back 2 Basics” pitch, Jack will be perplexed. Theo will ask if there are any questions afterward – and Jack will have plenty. It’s pretty much word for word the same concept Jack pitched 15 years ago. A rattled Theo will insist Kyle and Summer set him up, so Kyle will admit that’s true.

However, Summer and Kyle certainly didn’t force Theo to take the bait. Theo did that all on his own. After Jack gets updates on the whole Kendra situation, he’ll leave Theo’s fate in Kyle’s hands. Theo will push for another chance and will promise this won’t happen again. Kyle will agree that it won’t – because Theo’s fired!

Once Jack backs Kyle up, Theo will exit and leave Kyle to give a pitch of his own. Jack will be thrilled over his son’s great work. Later, Kyle and Summer will celebrate with some bubbly. The Young and the Restless spoilers say Kyle will feel like Theo got what he deserves.

At the Abbott mansion, Dina Mergeron (Marla Adams) will sit on the sofa and sip tea while Theo rants at himself. Theo will think he’s an idiot who went with his worst instinct in a moment of panic.

Y&R spoilers say Theo will wish Dina had known him when he was back in New York. He’ll talk about having revolutionary ideas before suggesting that Dina would’ve liked him.

Now Theo will feel like he’s screwed himself out of a job and perhaps a family. Across town, a gathering will take place to support Sharon Newman (Sharon Case) before her surgery. However, Sharon will want to make sure the gang is clear on one thing: This is NOT a pity party.

Things will turn serious as Sharon takes Nick aside for a private moment. Sharon will prepare just in case something goes wrong during the surgery. She’ll want Nick to promise he’ll take care of Faith and even Noah Newman (Robert Adamson). Noah may be a grown man, but Sharon will still need this peace of mind.

Then, it’ll be Mariah’s turn to get serious with her mom. Sharon will explain that at her pre-surgical appointment, she signed a healthcare proxy form. If Sharon ends up not being able to speak for herself or make her own decisions, she’ll want Mariah to speak for her.

Mariah will protest that nothing’s going to go wrong during the surgery – and Sharon will agree. She’ll insist this procedure is so not a big deal. Sharon will joke about planning to sleep through the whole thing, so that’ll lighten the mood and get her laughing with Mariah.

Next, Sharon will express surprise over a special delivery. It’ll be a gift basket from Phyllis Summers (Michelle Stafford), so Sharon will ask if it’s ticking. Tessa will make a joke about the bath bomb that’s included before Rey suggests a group photo. Afterward, Rey will let Sharon know everything’s going to be fine tomorrow.

At the clinic, Amanda Sinclair (Mishael Morgan) will flirt with Nate Hastings (Sean Dominic) and set up some lunch plans with him. Once Nate and Elena Dawson (Brytni Sarpy) deal with an emergency, Elena will quiz Nate about his recent date. Nate will admit it was good, so Elena will insist she’s happy for him.

At Society, Billy Abbott (Jason Thompson) will mention a story that could be major for Chancellor Media. This news could also take down an empire, so Lily Winters (Christel Khalil) will wonder what the source is. Billy will confess that it came from a vengeful Victoria Newman (Amelia Heinle), so Lily will suspect he wants to gain favor with his ex again.

Billy will expect Lily to rip him a new one like others have done, but she’ll insist he’s not the only person who’s battled personal demons. Lily dealt with her own and doesn’t scare so easily anymore. As for the story, Lily just won’t want Billy doing anything without informing her first.

At the Grand Phoenix, Amanda will talk to Nate about freedom. It’s something Billy gave her a good lesson on, so now Amanda intends to seize all life has to offer. Once Nate and Amanda show up at Society, they’ll walk over to chat with Lily and Billy. Lily will take Nate aside so that Billy can make a proper job pitch to Amanda.

The Young and the Restless spoilers say Amanda will drive a hard bargain, but she’ll ultimately make a deal with Billy. Once Lily learns the job offer’s been accepted, Lily will welcome Amanda to the team. During toasts at separate tables afterward, Amanda and Billy will steal a glance at each other.

It sounds like some fantastic scenes are coming up. Y&R fans won’t want to miss all the action! Don’t forget to stop by CDL frequently for hot Young and the Restless spoilers, updates and news.