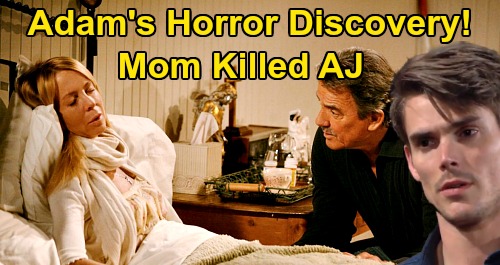 The Young and the Restless (Y&R) spoilers tease that the Kansas mystery will unravel during the week of April 20-24. Victor Newman (Eric Braeden) already explained the situation to Nikki Newman (Melody Thomas Scott), who can now see why Victor caved to Adam Newman’s (Mark Grossman) demands. It’s clear that Victor’s protecting someone – and it isn’t himself.

Of course, it’s certainly possible that Adam is AJ Montalvo’s killer. It’s common for people to block out painful childhood memories, so that easily could’ve happened here. However, there’s another option to consider. Since Y&R hasn’t revealed firm answers yet, it’s wise to look at this from every angle as we prepare for the bomb to drop.

Did Adam’s mother actually cause AJ’s death? Was Hope Wilson (Beth Toussaint) actually AJ’s murderer? Adam had a real soft spot for Hope and would definitely be affected by that news. He’ll feel pretty rotten if he’s been targeting Victor for something Hope did either intentionally or accidentally.

Victor brought Hope up during one of his recent confrontations with Adam. He wondered what Adam’s mother would think of what he was doing, so that could’ve been a clue about where the story was headed. Hope would indeed hate it if she knew Adam was going after Victor for something she did.

When this story spreads – and The Young and the Restless spoilers suggest it indeed will – Adam’s going to have a rough time. If Hope’s the real culprit, her name will be dragged through the mud. That would be Adam’s fault for digging and thinking he could use this dirt to manipulate Victor.

Y&R fans can expect Victor’s shocker to make some serious waves. Adam’s plot will backfire spectacularly and force him to lean on Chelsea Lawson (Melissa Claire Egan). All of that could line up with Adam’s mom potentially being responsible for AJ’s demise. Hope might’ve even saved her son’s life through her deadly actions.

Adam might learn that Victor’s stayed silent so far out of respect for Hope. Victor might’ve initially promised to cover everything up and take Hope’s secret to the grave. Whatever the case, it’s safe to say Adam will regret unearthing this Kansas story and opening up a can of worms!