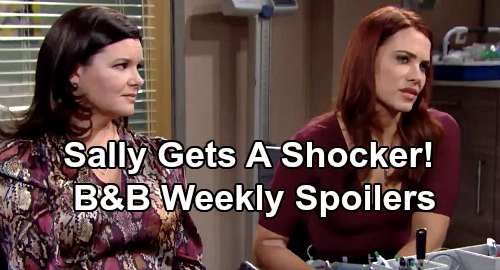 The Bold and the Beautiful (B&B) spoilers for the week of January 27 to January 31 tease that some shockers are in store. Before we get to those, we should point out that impeachment trial coverage may continue to affect B&B’s schedule. Additional episodes could be pushed back, but the following spoilers will all hit the screen sooner or later.

With that in mind, let’s discuss what’s coming up on The Bold and the Beautiful. For starters, Sally Spectra (Courtney Hope) will have a startling faceoff with “Flo” Fulton (Katrina Bowden).

She’ll make it clear that she’s not giving up Wyatt Spencer (Darin Brooks) without a fight, but Flo will wonder what Sally’s really fighting for. Why would Sally want Wyatt after he’s rejected her?

Sally will still feel like Wyatt loves her and will come around after he has time to reflect. However, her alarming symptoms will resurface soon enough. Sally will get shaky and dizzy, so she’ll ultimately decide to make a doctor’s appointment.

She’ll run into Katie Logan (Heather Tom) before her diagnosis comes in, so Katie will go with Sally to her follow-up session. Whatever Sally learns will be life-changing and something she definitely doesn’t want Wyatt to know.

Sally will make Katie vow to keep her mouth shut, but that’ll be tough since Wyatt will ask questions. He’ll grow increasingly fearful about how much he’s devastated Sally, so he’ll just want to make sure she’s all right.

Wyatt will get advice from Liam Spencer (Scott Clifton) and open up to Katie as well. That’ll leave Katie in a tight spot since she won’t want to betray Sally, but it looks like she’ll keep her promise.

As for Wyatt, he’ll end up cornering Sally and trying to figure out what’s up with her. Wyatt will want Sally to be straight with him about her feelings, but she’ll rebuff any pity and urge him to leave her be.

Next, Thomas Forrester (Matthew Atkinson) will stop Steffy Forrester (Jacqueline MacInnes Wood) from making a huge mistake – at least he’ll view it as a mistake!

Thomas will shut down Steffy’s confession plans and convince her to protect her future with Liam. He won’t want Steffy blowing things by sharing the real story behind how Hope Logan (Annika Noelle) saw the kiss.

Liam will remain in the dark for now, but Steffy will continue to battle guilt over her lies and deceit. Eric Forrester (John McCook) may also battle a little of that when he caves to Brooke Forrester’s (Katherine Kelly Lang) demand. He’ll infuriate Quinn Forrester (Rena Sofer) by kicking Shauna Fulton (Denise Richards) off the property.

Of course, Eric will try to be nice about it, but he’ll make it clear that he won’t stand for Shauna’s interference. Quinn won’t think they should be the relationship police here. If Ridge Forrester (Thorsten Kaye) wants to kiss Shauna, that’s his business.

Furthermore, Quinn won’t appreciate how Brooke came into her home and started barking orders. She’ll remind Eric that Brooke told him to end his marriage. Quinn will feel disrespected and outraged, but Eric will insist Shauna’s gotta go!

Later, The Bold and the Beautiful spoilers say Quinn and Brooke will have another fierce faceoff. It’ll push Quinn to her breaking point and leave the darkness inside her ready to burst out.

Sally confides in Katie this week on #BoldandBeautiful. Don’t miss it. pic.twitter.com/3Qc1iqFK3H