The Bold and the Beautiful Spoilers: Week of March 30 – Bill’s Desperate Plea to Katie – Eric Reacts To Quinn’s Confession 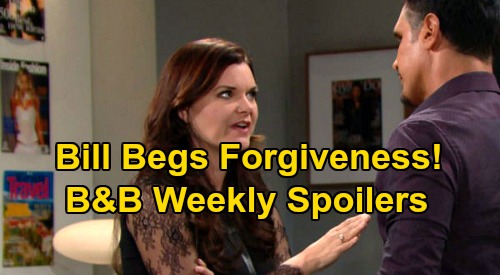 The Bold and the Beautiful (B&B) spoilers for the week of March 30-April 3 tease that the aftermath of Quinn Forrester’s (Rena Sofer) scheme will bring some serious confrontations. For starters, let’s talk about Bill Spencer’s (Don Diamont) part in all this. Since Bill loves Katie Logan (Heather Tom) and wants to keep his family intact, he’ll make a desperate plea for forgiveness.

Bill will certainly understand why Katie’s angry and may assure her she has every right to be. However, Bill won’t think they should throw away their family over a horrible mistake. He’ll try to make Katie believe that kiss with Brooke Forrester (Katherine Kelly Lang) was a one-time deal – something that’s already forgotten and behind him.

Unfortunately, that could be a hard sell. It’s obviously not true since Bill’s struggled to get that kiss with Brooke off his mind. This also isn’t the first time Bill’s betrayed Katie with Brooke. Katie may not buy that it was a one-and-done kind of thing since it’s never been that way before. There’ll inevitably be fears about Bill drifting back in Brooke’s direction.

Nevertheless, Bill will vow to put in the work. Even if Katie dumps him, B&B viewers can expect Bill to fight for the “Batie” fam and their future together. As for Brooke, she’ll face consequences of her own. Ridge Forrester’s (Thorsten Kaye) pain and anger will hit Brooke hard, but she’ll try to prove she’s a fighter, too.

Brooke will hope they can salvage their relationship, but it doesn’t look like Ridge will be interested. Over with Shauna Fulton (Denise Richards), she’ll head back to Las Vegas and assume “Bridge” will live happily ever after.

Shauna’s in for a big surprise once Ridge ultimately meets up with Shauna there. An intriguing pact is brewing down the road, so The Bold and the Beautiful fans will want to stay tuned.

In the meantime, Quinn will make a full confession. The mastermind of Brooke and Bill’s exposure will admit to it, so Eric Forrester (John McCook) isn’t going to be happy about the damage she caused.

Quinn will be pleased with the outcome of her destructive plan, but it should show Eric her true colors – which have always been just under the surface. This could easily put Quinn and Eric’s marriage to the test.

Dr. Penny Escobar’s (Monica Ruiz) loyalty will also be tested as Flo Fulton (Denise Richards) seeks her out and pushes for answers. As Flo’s concerns about Sally Spectra (Courtney Hope) grow, Penny will find herself getting grilled. Flo may mention some things that don’t add up about Sally’s terminal illness, but will Dr. Escobar spill anything?