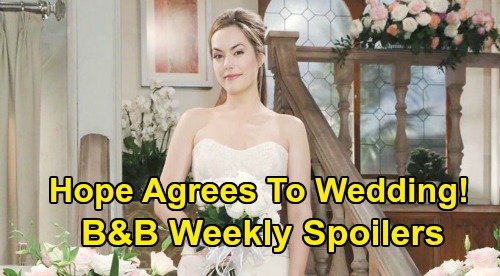 The Bold and the Beautiful (B&B) spoilers for the week of March 9-13 will bring some shockers – starting with an unexpected kiss. An out-of-the-blue lip lock will catch two former flames off guard and force them to reexamine their connection. Bill Spencer (Don Diamont) and Brooke Forrester (Katherine Kelly Lang) will certainly be taken aback when they let themselves savor a smooch.

After Brooke and Bill’s passionate kiss, they’ll contemplate their current relationships. Bill’s been happy with Katie Logan (Heather Tom) and wants to keep his family intact. However, he may secretly be missing the spark he once had with Brooke – a spark he’ll find again through this kiss!

As for Brooke, her marriage to Ridge Forrester (Thorsten Kaye) has been on the rocks for months, but she’ll cling to the hope of saving it. The Bold and the Beautiful spoilers say Brooke and Bill will likely try to forget the kiss they shared, but that won’t be possible.

When Bill winds up about fantasizing about Brooke later, Wyatt Spencer (Darin Brooks) will inadvertently burst his bubble. He won’t realize his dad’s daydreaming about his ex, so Bill probably won’t let him in on that dirty little secret. Instead, Bill will shift gears and rant about Thomas Forrester (Matthew Atkinson).

Even so, Bill will eventually broach the topic of Brooke and her current man. He’ll tell Wyatt he doesn’t approve of Brooke and Ridge’s relationship, so Wyatt may read between the lines and wonder if Bill wants Brooke back. Although that’ll wind up being true at some point, Bill may not be willing to admit it yet.

Other Bold and the Beautiful spoilers say Steffy will deliver a bombshell to Hope Logan (Annika Noelle). She’ll come clean about the kiss manipulation and the fact that Thomas is still completely obsessed with her.

Later, Steffy will join forces with Hope and Liam Spencer (Scott Clifton) to destroy Thomas’ wedding to Zoe Buckingham (Kiara Barnes. They’ll think they need protect Douglas Forrester (Henry Joseph Samiri) and show Thomas that he doesn’t always get what he wants. Once a plan’s in place, Hope and Liam will show up at the ceremony to put it in motion.

Meanwhile, Steffy will corner Zoe along with Brooke. They’ll be eager to talk some sense into Zoe – especially Steffy since she’ll know about this plot that’s cooking.

Unfortunately, Zoe will be unwilling to see Thomas’ infatuation. She’ll move forward with her plan to marry Thomas, so Steffy and Brooke will just have to let her endure the pain ahead.

Speaking of pain, Douglas will face more of it thanks to these nuptials. He’ll have his worst meltdown yet once the ceremony’s underway and will ultimately run upstairs in tears. Zoe will push Thomas to complete their vows, but Hope will have other ideas. After following Douglas upstairs, Hope will head back down and most likely stop the show in that showstopper gown Thomas designed!

B&B spoilers, news and updates say Thomas and the wedding guests will be stunned by Hope’s return, so she may offer up herself as a replacement bride. Hope will apparently give Thomas the chance at what he wants only to yank it away. This is a great strategy to expose Thomas’ true motives and give him the ultimate comeuppance.

Some exciting scenes are on the way, so don’t miss all the action. As other B&B news and updates emerge, we’ll keep you posted. CDL’s your hotspot for fantastic Bold and the Beautiful spoilers and scoops.