The Bold and the Beautiful Spoilers: Week of May 11 – ‘High Fashion and Hot Drama’ – Paparazzi Chaos, Runway Sabotage & Stolen Designs

BY Heather Hughes on May 8, 2020 | Comments: Leave Comments
Related : Soap Opera, Spoiler, Television, The Bold and the Beautiful 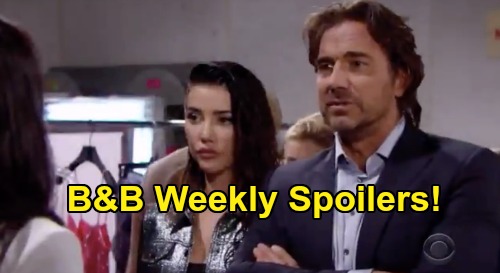 This is great news since many B&B fans are always asking for more fashion on the show. The Bold and the Beautiful has been lacking in that department lately, but at least we can remember more fashionable days through these classics! Here’s what you can expect as the stylish encore presentations begin.

On Monday, B&B’s taking us back to 1997 for an episode revolving around the Forrester Spring Collection. Thanks to an unfortunate delay, Eric Forrester (John McCook) and Stephanie Forrester (Susan Flannery) fear this may be the last collection Forrester ever releases. Villa d’Este on Lake Como is a picturesque setting for the chaos that unfolds.

Ridge Forrester (Ronn Moss) is upset over the tough situation, but Brooke Logan (Katherine Kelly Lang) does her best to settle him down. However, more trouble’s brewing as Lauren Fenmore (Tracey E. Bregman) and the original Sally Spectra (Darlene Conley) crash the runway show. This duo hopes to sabotage the event and finish their rivals off!

Tuesday’s 2012 episode brings the start of Apsen Fashion Week, which leaves Hope Logan (Kim Matula at the time) in a tight spot. Hope’s seen as a fraud and hounded by paparazzi, so this isn’t the trip she had in mind. After Hope bids Liam farewell, he reminisces with Steffy Forrester (Jacqueline MacInnes Wood) – completely unaware that Bill Spencer’s (Don Diamont) targeting Hope.

On Wednesday, The Bold and the Beautiful spoilers say an episode from 2016 is set to air once again. Quinn Forrester (Rena Sofer) planning a fashion show, but her showstopper plans don’t go over well. Wyatt Spencer (Darin Brooks) and Ivy Forrester (Ashleigh Brewer) throw their support behind Quinn’s idea despite most of the Forrester family’s disapproval.

Katie Logan (Heather Tom) watches the fashion show with Eric, but Ridge is determined to protest Quinn’s turn as Runway Queen. When Ridge decides to sabotage Quinn’s presentation, it sets up some fashion mayhem.

Thursday’s B&B episode is one from 2017. Before Steffy and Liam’s wedding in Australia, the bride takes part in a fashion photoshoot along with Ivy. While they strut their stuff in front of the Sydney Opera House, Bill helps Liam complete the final prep work for his nuptials. Since Brooke and Ridge are attending the ceremony together, Bill braces to see them together and pushes through his pain.

Finally, Friday will bring another 2017 blast from the past. Sally Spectra (Courtney Hope) deals with guilt over her betrayal of both Coco Spectra (Courtney Grosbeck) and Thomas Forrester (then played by Pierson Fode). Stolen designs are ready to take center stage at the Spectra fashion show when CJ (Mick Cain) appears to offer a reminder. The building will be sold if the show isn’t a hit.

Over with Wyatt, he debates with Bill about whether Sally can be a success. That leads to some father-son tension since Bill’s hoping Sally will crash and burn. It sounds like this classic will definitely be one worth watching again.

Grab a front row seat because #BoldandBeautiful’s Fashion Week starts on Monday. ✨You won’t want to miss it! pic.twitter.com/yghx7rKrq7