The Bold and the Beautiful Spoilers: What Happens To Thomas After Hope Mannequin Destroyed? 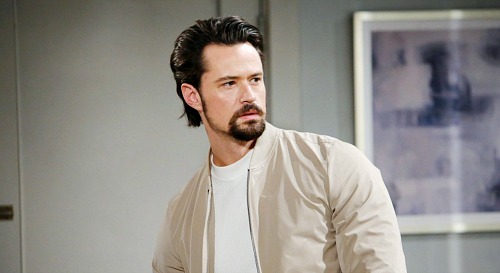 The Bold and the Beautiful spoilers document that Thomas Forrester (Matthew Atkinson) can’t continue on like this for much longer. His visions of the Hope Spencer (Annika Noelle in a dual role) mannequin coming to life are increasing, both in frequency and in the intensity of perceived commands.

The arranged dinner with Douglas Forrester (Henry Samiri), with the real Hope present, heightens the complexity of a storyline that feels like it’s nearing an imminent jump, or conclusion. Whether Thomas will inadvertently reveal the depth of his torture in front of Douglas, the real Hope, or both remains to be seen.

Safety protocols kept Samiri, a number of other child actors, and some adult cast members away from the set since last March. Viewers were especially glad to see Samiri, as this strong child actor always adds depth to the scenes he’s part of.

The camaraderie that exists between Atkinson, Noelle, Samiri, and Scott Clifton (Liam Spencer) is implied through the many solid scenes this group of actors has appeared in since Atkinson and Samiri joined the cast in early 2019.

Their combined efforts have deepened the type of storylines that their characters are able to present, with the most recent effort purposely pushing viewer’s suspension of disbelief.

In the recent past, Douglas revealed that his father kept the Beth Spencer (Madeline Valdez and River Davidson) secret. He also helped Hope bait Thomas into admitting that he loved her and not Zoe Buckingham (Kiara Barnes), which stopped the Thoe wedding ceremony cold. So, it’s reasonable to believe that Douglas is about to take action a third time.

Bold And The Beautiful Spoilers – When The Hope Mannequin Is Disassembled

How could Hope use the mannequin in her line after it’s learned that Thomas became attached to it. With whatever Thomas’ hopeful recovery and comeback path at that plot point, the mannequin obviously can’t remain in his apartment, or even be used at Forrester Creations.

Kudos to Noelle for her portrayal of the plastic edition of herself. The mannequin’s spark to life, with Noelle’s robotic movements included, was surprising and pushed this arc to the next level.

Soap fans can speculate that the outstanding makeup preparation that’s taken place prior to these scenes may have been done mostly, if not fully, by Noelle herself, due to physical distancing protocols.

This storyline has been teased by Atkinson as more than an extension of Thomas’ known mental health issues. So, he’s hallucinating because of a brain tumor, or some type of developed condition that’s dramatically impacting his view of reality.

The head trauma Thomas suffered in recent weeks is likely tied into whatever this diagnosis will be when it’s revealed. In the meantime, this scary, surely soapy storyline plays on, with more anticipated twists dead ahead.