The Bold and the Beautiful Spoilers: When Will There Be New Episodes of B&B – Answers About CBS Soap Resuming Production

BY Heather Hughes on May 9, 2020 | Comments: Leave Comments
Related : COVID-19 NEWS, Soap Opera, Spoiler, Television, The Bold and the Beautiful 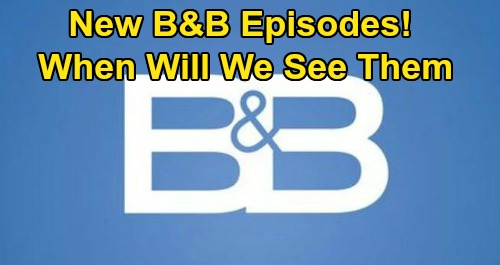 The Bold and the Beautiful (B&B) spoilers reveal that although fans have been enjoying the blast-from-the-past episodes, everyone really wants to know one thing: When will there be new episodes of B&B? The cast and crew stopped filming after production was suspended on March 17. The Bold and the Beautiful managed to make their new episodes last until April 23 before switching to theme weeks.

There have been some great weddings and exotic locales featured in these encore episodes, so those are a fun way for new fans to see what they missed. They can also serve as excellent reminders for anyone looking to brush up on their B&B history. However, nothing’s a substitute for new content!

As nice as it is to reflect on B&B memories, we all want to know when production will resume at The Bold and the Beautiful. Unfortunately, there’s no confirmation on when the cast and crew can get back to work.

The COVID-19 aka coronavirus crisis led to this shutdown, so that’s something that’ll have to be monitored closely. The priority is keeping everyone who works on the show safe.

Production was suspended at The Young and the Restless on March 17 as well, and their cast members are in the dark on any return plans. There’s a lot of uncertainty surrounding his topic since a pandemic isn’t something anyone at Y&R or B&B can control.

It’s just a “wait and see” kind of thing, so The Bold and the Beautiful fans will have to be patient.

There’s been some buzz from General Hospital actors about possibly returning to work in July or August. However, those plans are only tentative and aren’t something you can take to the bank.

It’s wise to just wait for something more official since everyone’s guessing at this point. Of course, B&B viewers can hope for the best! Once one soap gets up and running again, the others will follow.

We’ll give you updates if any news is released on an official first airdate back. It could take a while for that to be nailed down, so just keep that in mind! For now, The Bold and the Beautiful spoilers say theme weeks will continue to feature all the conflict and fashion we’ve come to expect. CDL’s your go-to source for hot Bold and the Beautiful spoilers, updates and news.