The Bold and the Beautiful Spoilers: Who Wins The Father’s Day Award On B&B? 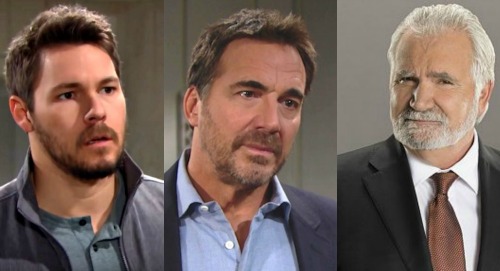 The Bold and the Beautiful spoilers document that various dads are eligible for this proposed B&B Father’s Day award. There are certain candidates whose actions disqualify them from even being nominated. Yes, Thomas Forrester (Matthew Atkinson), you’re out of the running.

However, there are a number of legitimately qualified candidates who deserve to be nominated. Let’s focus on three, with those not referenced entering the honorable mention category.

Bold And The Beautiful Spoilers – Eric Forrester Tops The List

Eric Forrester (John McCook) has a number of children. He had most of them were with the love of his life, Stephanie Forrester (Susan Flannery). All of Eric’s offspring care deeply for him. That alone says a lot about McCook’s character.

Focusing on one of his children, Ridge Forrester (Thorsten Kaye), who is Massimo Marone’s (Joseph Mascolo) biological con, Eric was very forgiving in the recent past when it came to Ridge’s flirtatious involvement with Quinn Fuller Forrester (Rena Sofer).

In more recent times, Eric has been fully supportive of Ridge and his son, Thomas. That further underscored the depth of Eric’s fatherly and grandfatherly presence.

Bold And The Beautiful Spoilers – Liam Spencer Has Earned This Distinction

Liam Spencer (Scott Clifton) was put to the fatherhood test on many occasions since the moment when his second daughter, Beth Spencer (Madeline Valdez and River Davidson), was born. He and her mother, Hope Spencer (Annika Noelle), were tortured by what Reese Buckingham (Wayne Brady) did and then had that horror extended because Thomas refused to tell what he’d learned about the baby steal and sale scheme, while also intimidating others into remaining silent.

The birth of Liam’s first child, Kelly Spencer (Avalon and Colette Gray), was a joyous event. Liam’s love for Hope caused Steffy Forrester (Jacqueline MacInnes Wood) to decided that Steam was over. But Clifton’s character has remained fully involved in Kelly’s life, with the mother’s of both of his children having only good things to say about Liam’s fatherhood performances.

Bold And The Beautiful Spoilers – Ridge Forrester Makes The Cut

Ridge (as then played by Ronn Moss) lost one of his daughters, Phoebe Forrester (Mackenzie Mauzy) years ago. Her fraternal twin, Steffy, and R.J. Forrester (Anthony Turpel) are supportive of their father. But Thomas has badly betrayed him.

Think of how far Ridge went in defending Thomas. Doing so almost cost him his current marriage to Brooke Logan (Katherine Kelly Lang) and still might.

The tough love Ridge displayed, when learning that Thomas wasn’t telling the truth in wanting to marry Zoe Buckingham (Kiara Barnes), is just the latest affirmation that Kaye’s character is a good father. Like his dad, Eric, and Liam, Ridge deserves consideration for this award.