The Bold and the Beautiful Spoilers: Will Thomas & Sally Reunite on New B&B Episodes? – Courtney Hope Spills What She Knows 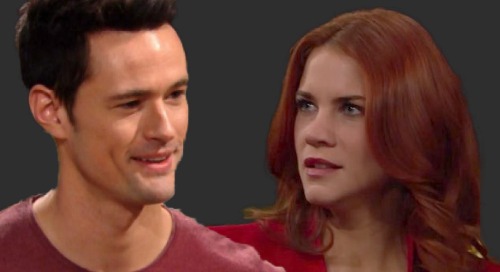 The Bold and the Beautiful (B&B) spoilers tease one CBS soap star was taken aback by the fan reaction following a major story twist. B&B fans know Sally Spectra (Courtney Hope) was seemingly suffering from a terminal illness, but the show later revealed it was all a scam. Some viewers were supportive of Sally taking charge while others hated that the character was thrown under the bus.

In an interview with Soap Opera Digest, Courtney Hope talked about the mixed reaction and admitted there was one aspect she didn’t see coming. “But what I found very surprising is that a lot of fans were pushing for Thomas and Sally again, which I haven’t heard in a really long time,” Hope said.

Hope suggested that she was amused by how much people wanted crazy to fall for crazy! Many Bold and the Beautiful fans would like to see this pairing revisited, so Hope talked about some of the comments out there.

The B&B star said, “A lot of them were like, ‘Screw Wyatt. Leave him. Now that Sally is crazy and Thomas is crazy, they’d be fun together.’”

How would Hope feel about a “Tally” reunion? Would this Bold and the Beautiful actress be on board? The answer is yes! Hope confessed that she hasn’t heard anything about Thomas and Sally reuniting from the writers, but she does think it’d be interesting to explore the pairing again – especially now that Matthew Atkinson is in the role of Thomas.

That could certainly bring some different chemistry and a fresh take. Hope noted that “it could be a fun and interesting dynamic to see it play out.” Bottom line, a “Tally” reunion isn’t happening yet as far as Hope knows, but it could down the road!

Repeat love interests are definitely common on B&B, so there’s still a chance Thomas and Sally will find their way back to each other.

We’ll deliver updates as other B&B news rolls in. The Bold and the Beautiful spoilers say new episodes are coming up, so we’ll look forward to the first airdate back being announced.

The cast and crew are filming some exciting things for patient fans! CDL will have other terrific Bold and the Beautiful spoilers, updates and news to check out, so pop back in often.