The Bold and the Beautiful Spoilers: Will Wayne Brady Return To B&B – Zoe Visits Reese Buckingham, Gets Closure?

BY Sean O'Brien on May 13, 2020 | Comments: Leave Comments
Related : Comings & Goings, Soap Opera, Spoiler, Television, The Bold and the Beautiful 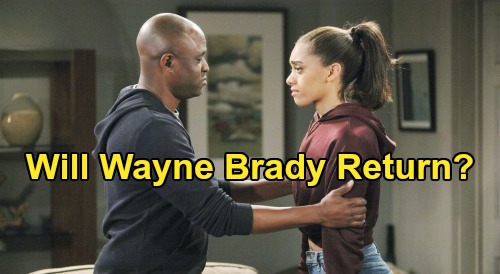 The Bold and the Beautiful spoilers document that Zoe Buckingham (Kiara Barnes) needs time to think after the failed Thoe wedding ceremony. As she tries to reestablish her life, a needed meeting with Reese Buckingham (Wayne Brady) can allow closure for her and the audience when new episodes air.

B&B fans know that Reese was arrested and jailed for kidnapping Beth Spencer (Madeline Valdez and River Davidson) at birth and then selling her to Taylor Hayes (Hunter Tylo) for her daughter, Steffy Forrester (Jacqueline MacInnes Wood), under the guise of a private adoption, in order to satisfy his gambling debts. But the audience never got to see a traditional sendoff for Brady’s character, which left the storyline open for a later revisit.

Reese is a gambling addict. Fans are right to assume that he’s been forced to deal with that issue behind bars.

While the discredited doctor could be participating in some form of modest wagers in prison, he’s not able to put his daughter and his financial stability at risk due to his current circumstances. It’s also possible that the consequences of his actions have caused a desire to seek redemption.

Thomas Forrester’s (Matthew Atkinson) chaotic personality was similar to Reese’s, which seems to be one reason why Zoe was drawn to him. It’s a pattern she was familiar with.

Zoe subconsciously appeared to be trying to help Thomas fix himself, which allowed her generous forgiveness of his previous threats to turn her into the authorities for the role she and her father played in the Beth scandal. Zoe’s quick acceptance of Thomas’ apology was mixed with her then desperate financial situation and desire to believe that he could facilitate a re-entrance into Forrester Creations.

For whatever all of her reasons were, which also included physical attraction, Zoe enabled Thomas’ behavior.

Xander Avant (Adain Bradley) cared about Zoe. He forgave her behavior that took place in England, but was unwilling to accept Thomas’ explanation of Emma Barber’s (Nia Sioux) fate and opted to leave Los Angeles, California, and Zoe behind.

If Zoe wants to set her life on a positive course she can choose to meet with Reese, who surely would benefit from her support as he pays his debt to society. But she can also try to reach out to Xander, even if only to see how he’s doing and try to be his friend again.