The Bold and the Beautiful Spoilers: Would You Like To See Ronn Moss Return To B&B?

BY Sean O'Brien on May 10, 2020 | Comments: Leave Comments
Related : Soap Opera, Spoiler, Television, The Bold and the Beautiful 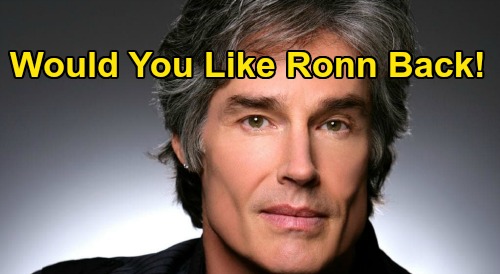 The Bold and the Beautiful spoilers document that Ronn Moss (Ridge Forrester) debuted with the cast of B&B in its inaugural year, 1987. His stay on the spin off of The Young and the Restless lasted for a quarter-century, ending in 2012. Fans love Ronn Moss and many still have a hankering for his return to B&B!

Moss’ decision to leave was personal. He noted at the time of his departure that he was satisfied with his efforts, appreciated his cast mates, and all who were involved with the show. Moss was also very grateful for the strong fan support he’d always enjoyed.

The daytime world has long been fluid, in terms of cast adjustments. The mere nature of the business creates natural changes, which promotes questions about whether a former cast member would ever return and if so, in what role?

So, would viewers like to see Ron Moss reprise his role as Ridge, or play a different character entirely?

Voluntarily leaving a long-running daytime role is a dramatic choice. It took courage and confidence for Moss to do so.

Moss is an accomplished singer and musician, most famously being part of the band Player. His acting efforts began in 1983, when he appeared at Ruggero in the movie Hearts and Armour.

The actor appeared in a number of television shows and movies during his run on B&B. Since departing the soap, he has continued his musical and acting efforts. Moss appeared on General Hospital, with Player, during the annual Nurses Ball in 2014. Notably, Moss also played John Blackwell on the acclaimed digital soap series The Bay, where he also served as a producer.

Bold And The Beautiful Spoilers – What About Thorsten Kaye?

Thorsten Kaye (Ridge) took over for Moss in 2012. He’s continued to play this character through present day.

No news exists that indicates Kaye wants to leave the cast, or that B&B is considering replacing him. So, it appears as though he’ll continue playing Ridge indefinitely.

However, the entertainment world involves upheaval. Cast adjustments on daytime dramas can never be completely ruled out.

Bold And The Beautiful Spoilers – Recast As Ridge Forrester, Or In A New Role?

It’s unknown how Moss would respond if B&B offered him the opportunity to return to the show in his original role. A desire to work in a familiar setting could prove enticing, as would reprising the role that made him famous.

Technically, Moss already reprised his role. Hardcore fans know that Lane Davies (Ridge) filled the role when Moss was on a brief leave from B&B in 1992.

Separate from a reprisal would be a new part. Stephanie Forrester (Susan Flannery) had Ridge with Massimo Marone (Joseph Mascolo). But who’s to say that they didn’t have twins, with the other boy being stolen at birth, or Massimo had a previously unknown child with another woman who happens to greatly resemble Ridge?

Either option noted above are just two that could allow Moss to return as a relative of Ridge, unless he’d play someone with no blood ties to his original character.